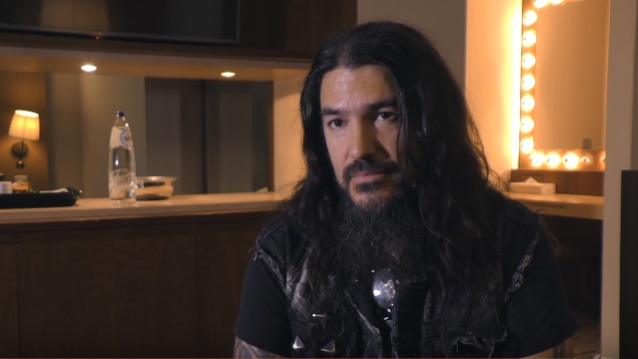 MACHINE HEAD frontman Robb Flynn was recently interviewed by Holland's FaceCulture. You can now watch the chat in two parts below.

Speaking about MACHINE HEAD's musical evolution, Flynn said: "I'm never gonna write another 'Burn My Eyes' [MACHINE HEAD's 1994 debut album] again. I'm never gonna be 24 and selling drugs and living this crazy life in the streets — I can't go back there; I'm never gonna be that dude. And there's nothing wrong with that; it's fine. I'm a different person, so I write from that different place now. I write from where I am now and how I feel now and my view on the world now, and that is different. I've changed, I've grown, and I think that our fans have changed and grown with us. And we know we probably lost some [fans] along the way, just like every band loses some fans along the way, but we've gained a lot more on the way.

"A lot of people go, 'Write another album like 'Burn My Eyes',' and I'm, like, how phony would it be for me to pretend I'm 24 years old again?" he continued. "I can't fucking do that. It would be so stupid and it would probably be the most corny shit ever. So I just do my thing and we just do our thing. I'm an artist and I hope people just follow me down whatever rabbit hole… And if they don't, that's cool."