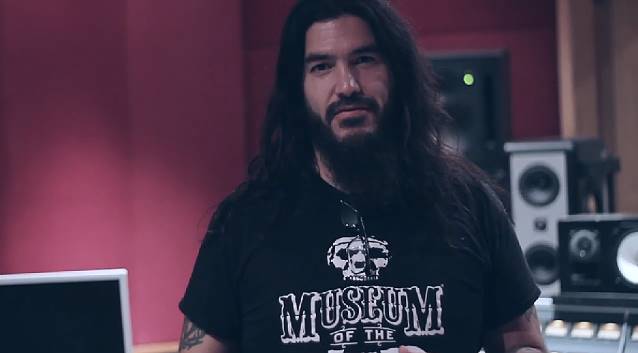 MACHINE HEAD's ROBB FLYNN On Upcoming Album: I Don't Feel This Record Sounds Like 'The Blackening'

Comments MACHINE HEAD frontman Robb Flynn in the latest installment of his online blog, "The General Journals: Diary Of A Frontman... And Other Ramblings": "Greeting, my friends, from sunny Northern California where it's 91 degrees today (!!) and The Lawsuit Kings are hard at work completing what is going to be a massive, MASSIVE album.

"Yep, we're still in the studio, and as much as I'd love to say we're done, we still got a few weeks left to go. So yes, you did the math correctly, that's 10 weeks we've been in here, WHEW! I know, seems like a while, but in reality, it took us three months to record 'The Blackening' (most of which was guitars),so were about the on par with that.

"Not to say that this record is anything like 'The Blackening'; it isn't. But what I would say is that the songs are as epic in scope, if not more so, except where 'The Blackening' was more epic in the guitar department, this is more epic in the EVERYTHING department. Strings arrangements, keyboard arrangements, massive vocal layering (one track, 'Sail Into The Black' has 40 tracks of vocals),drum overdubs, and, of course, the standard MACHINE HEAD quadruple tracking of the guitars.

"It takes a while to complete, but FUCK, does it sound CRUSHING when it's done!!

"We sent the first finished tracks ('Killers & Kings' and 'Night Of Long Knives') off to Colin Richardson to mix over in England, and we will continue hammering out the remaining songs, and the remaining 12 tracks of guitar to do. We should finish the track formerly known as 'DokVanSchenkerSnake' (now called 'Ghosts Will Haunt These Bones') today.

"Phil has definitely re-envisioned his lead-style and it's really cool to hear him challenge himself like this after all these years into playing with him. It's less all-out shredding, and more perfect-note-choice. We've talked numerous times about how cool it is that you can 'hum' Kirk Hammett's leads, that they are SO memorable they become part of the melody of the song, and he's been really inspired by that. You guys will be stoked.

"I know I brought up 'The Blackening' earlier, but I want to reiterate, I don't feel this record sounds like 'The Blackening'. It feels like we're still moving forward. If I HAD to compare it to another record of ours, it may be closer to 'Through The Ashes Of Empires' in one aspect only, the simpler song arrangements. It's still what I would just call classic metal, but we've simplified beats, simplified riffs, taken the unnecessary complicated-ness of something and made it simple. I've even applied that to my lyrics, where I've stripped out a lot of extra words ('the's,' 'and's,' etc),and invented a lyrical technique I call 'clustering,' where you cluster vowels or cluster 'plosives' ('K's,' 'T's,' 'Ch's') together to make it sound heavier, or flow better. It doesn't read all that poetically, but in the song it sounds really cool. I've also really worked hard on sharpening up my rhyme schemes, finding clever places to place rhymes, instead of the usual place at the end of a line, or even again, 'clustering' rhymes. It makes an abstract concept like 'Killers & Kings' (which references 20+ Tarot Cards, and that I'm very proud of the end result) to have a real meaning.

"Out of that stripped down musical landscape, we've then taken that new (to us at least) 'extra space' and added in layers of strings, layers of dark, ambient keys, layers and layers of vocals, and it sounds HUGE.

"I just watched a documentary of 'A Night At The Opera' by QUEEN, and while I'd never EVER put myself in Freddie Mercury's league, there have definitely been times during this recording where I've drawn a parallel to the epic-ness involved to make this album be what it needs to be.

"The 'A Night At The Opera' of metal? Well... that's a fuckin' stretch, we are just a metal band at the end of the day, but we're on to something here.

As part of this year's Record Store Day on April 19, MACHINE HEAD released a 10-inch vinyl single, with the A-side containing the "demo" version of a new song, "Killers & Kings". The B-side is a cover version of the track "Our Darkest Days" from one of MACHINE HEAD's favorite bands, IGNITE.

The entire "Killers & Kings" song can now be streamed in the YouTube clip below.

Other songtitles set to appear on the new MACHINE HEAD album include "Beneath The Silt", "Eyes Of The Dead" (formerly "Ojos De La Muerte") and "How We Die".