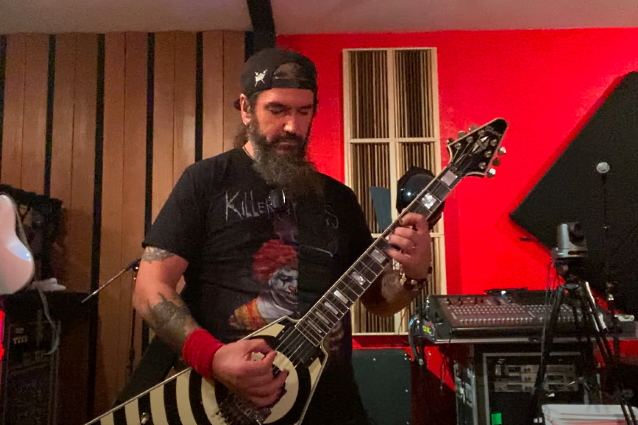 MACHINE HEAD frontman Robb Flynn has paid tribute to Eddie Van Halen, who died on Tuesday (October 6) at the age of 65. The legendary VAN HALEN guitarist died at St. John's Hospital in Santa Monica, California. His wife, Janie, was by his side, along with his son, Wolfgang, and Alex, Eddie's brother and VAN HALEN drummer.

Writing in the latest installment of his online blog, "The General Journals: Diary Of A Frontman... And Other Ramblings", Flynn said: "My mind is seriously blown right now. I cried today... a couple times. He is the G.O.A.T. Guitarists still haven't caught up to what he’s accomplished on those first five records. He was one in a billion.

"Dude was a ROCK STAR. Larger than life personality, so much style, so much class. They broke the mold with Eddie Van Halen. Rest in peace legend".

Flynn added a video of him playing Eddie Van Halen's classic instrumental "Eruption", saying: "Nothing will ever be as good as the original, but I'm gonna keep on trying every day, like I have for 30 years, to get that good."

Robb also posted an episode of his "No Fuckin' Regrets With Robb Flynn" podcast in which he pays "an emotional tribute to the late great Eddie Van Halen who was a MASSIVE influence on my playing, and the guitar world in general, the EVH posters I had on my wall, the reason I play leads/solos holding the guitar pick like Eddie, the time Frank from HATEBREED and I bugged out on the completely insane isolated guitar track for 'I'm The One', the licks that I borrowed on MH tunes from the master, and I play some of my favorite songs and solos."