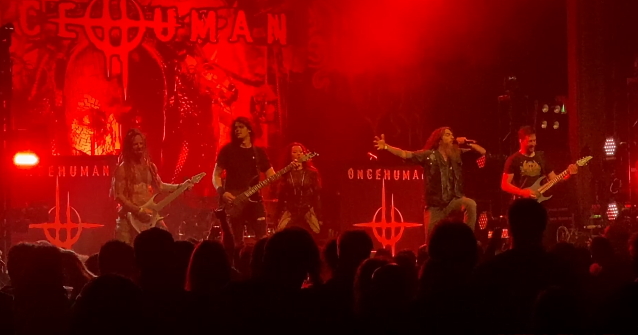 MACHINE HEAD's Robb Flynn joined ONCE HUMAN on stage this past Tuesday, October 26 at The Regency Ballroom in San Francisco, California to perform the MACHINE HEAD classic "Davidian". Video footage of his appearance can be seen below (courtesy of Capital Chaos TV).

Pieced together over the last two years, "Scar Weaver" sees ONCE HUMAN refining and redefining their sound, inspired by a sudden creative surge from Karon, and Hart pushing herself to new heights, showcasing a vastly expanded vocal range in the process.

"I always had a tremendous amount of belief in Lauren's ability to be a legit frontwoman, but when this began she was new, and so there was a lot of development to happen over time," says Logan. "She's really blossomed. She's grown a lot as a vocalist, a performer and a lyricist through all of this."

"Vocally, I've changed a lot since the last record," Lauren notes. "My screams got lower and the cleans became stronger. I've become much more comfortable with clean singing through touring with KAMELOT, because they really pushed me to do that. I've learned a lot about my voice since then. But a lot of this starts with Max's melodies, and sometimes I felt like it would be cheating to just growl over these amazing pieces of music, and it'd be so much better to do something that complements it. So sometimes the growls have melody too."

One highlight of the new ONCE HUMAN record is preview single "Deadlock", featuring a vocal cameo from Flynn. Mader's history with MACHINE HEAD is well documented, not least in recent times when he toured the globe with Robb for the Bay Area band's "Burn My Eyes" 25th-anniversary tour. As a result, this new collaboration needs no explanation, but Lauren remains thrilled by the whole experience.

"It was absolutely amazing, are you kidding?" she grins. "I didn't believe it was happening until he sent something back and I heard his voice on our song. I was like, 'Holy crap! This is real!' He came back with a new chorus and it was so much better than mine, so my chorus was gone! [Laughs] But then performing with him in the video, that was insane. The energy he brings on stage, he brings in person too. It was a great experience and his energy is so powerful. The video came out amazing."

MACHINE HEAD's "Burn My Eyes" anniversary tour saw Flynn and bassist Jared MacEachern play the band's classic debut album in its entirety for the first time ever, with original "Burn My Eyes"-era drummer Chris Kontos and Mader joining in.

Last November, MACHINE HEAD released a new single called "My Hands Are Empty", via Nuclear Blast. The song marked the first musical collaboration between Flynn and Mader in 24 years.