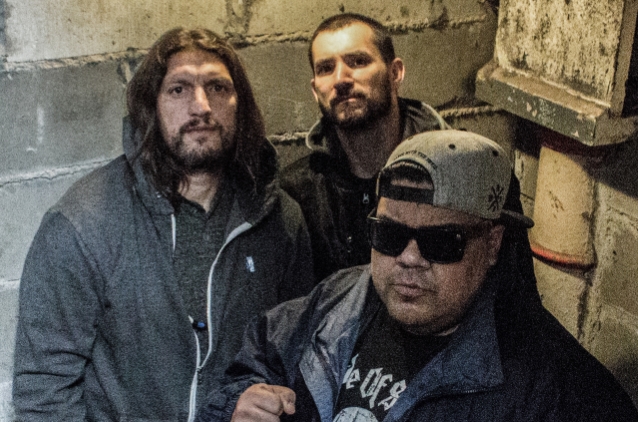 " Freight Train", the new video from New York hardcore veterans MADBALL, can be seen below. The song is taken from the band's latest album, "For The Cause", which was released on June 15 via Nuclear Blast. The follow-up to 2014's "Hardcore Lives" was co-produced by Tim Armstrong (RANCID),who also makes a guest appearance on the song "The Fog". It was mixed and mastered by renowned producer Tue Madsen (MESHUGGAH, THE HAUNTED, SICK OF IT ALL) at Antfarm Studios in Denmark. Former MADBALL guitarist Matt Henderson laid down the guitar tracks in the studio, but is not touring with the group.

MADBALL frontman Freddy Cricien told Grasser Production about "For The Cause": "It's the most diverse record we've done, period. It's one of my personal favorites, but that's me, you know. Everyone's different. Some people are going to say 'Set It Off' was their favorite because that's when they got into our band in that time period, but overall, the feedback has been super-positive from old-school heads and new people, so that's a good thing. But we personally love the record and we needed to start diversifying a little bit. We're known for a certain sound and a certain style and that's great that we're known for a certain style within our scene, but you also have to grow a little bit and I feel like we did a lot of growing on this record. A lot of diverse stuff; it's all MADBALL, but it's different little flavors here and there and I think the record is the most diverse record we've done and we're happy with that and we hope everybody else is happy with that."

Legendary rapper, actor and frontman Ice-T (BODY COUNT) guests on the song "Evil Ways" from "For The Cause".

"I met him in New York and he made an impression on me and I kept him in mind," Freddy told Metal-Heads.de. "I was thinking of a song where I pictured Ice-T on it and I just reached out to him and yeah, he was all about it, because when I met him, he had a lot of respect for MADBALL and New York hardcore. He made it a point to tell me that, and I remembered that and I thought that was very cool of him. Then, when this song popped up, it's called 'Evil Ways', I said, 'Man, that'd be a good song for Ice-T.' It just happened. There was a lot of respect being thrown back and forth."

Freddy told Metal-Heads.de: "Just to clarify, Mitts didn't leave us while we were writing the record. Unfortunately, it was left up to me — I had to let him go during that time because we just came to a point where something had to change. And Mitts is an old friend and I love him dearly and he's still my friend. We're still very dear friends. The reality is, I value the friendship and so, better to end it on a good note than be weird. I mean, Mitts would have stayed in the band no matter what. He loved traveling, he loved playing MADBALL, he loved doing all this. He loves playing his instrument — he's a good guitar player. But the reality is, sometimes relationships come to a point and someone has to say, 'Hey, this is over.' And that someone had to be me because that's where I'm left with that executive decision. But,it was no ill will. There was nothing bad, it's just something we did, then we moved forward and kept writing the record and that's it. The only person that could have played guitar on this record is Matt Henderson and he was very excited."

MADBALL will join SUICIDAL TENDENCIES on the "Still Cyco Punk After All These Tours" later this month.