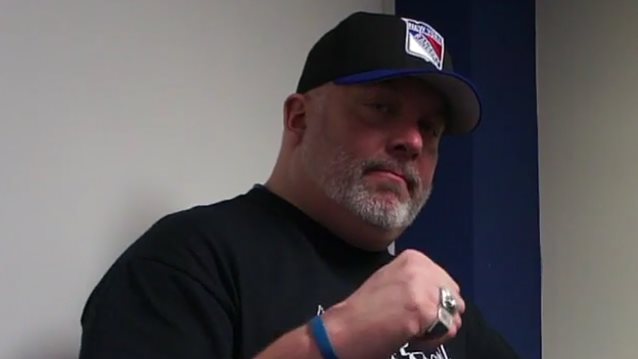 MADBALL Guitarist Says 'It's A Real Honor' To Tour U.K. With KORN And LIMP BIZKIT

"Mike James Rock Show" conducted an interview with guitarist Brian "Mitts" Daniels of New York hardcore veterans MADBALL prior to the band's December 18 show at the Motorpoint Arena in Cardiff, Wales, United Kingdom as the support act for KORN and LIMP BIZKIT. You can watch the full chat below. A few excerpts follow (transcribed by BLABBERMOUTH.NET).

On how MADBALL ended up opening for KORN and LIMP BIZKIT in the U.K.:

Brian: "We got invited to come out on this. To give you the back story, one of our boys works in the LIMP BIZKIT camp as a security guy. Over the summer, LIMP BIZKIT played on some festivals with AGNOSTIC FRONT, and so the topic of hardcore bands came up, and Fred [Durst, LIMP BIZKIT frontman] was, like, 'Oh yeah, I remember AGNOSTIC FRONT. I love them.' We would have never known. Then our friend who is with him was, like, 'Check out MADBALL,' and he checked us out and said 'I like these guys.' Then, a couple of months later, we were on the road with our friend, the one I'm talking about, our boy Chris, and he's, like, 'Hey, this guy texted me last night. He wants you to come on tour.' He invited us out on this tour."

On whether this is the biggest indoor tour MADBALL has done:

Brian: "Probably biggest indoor [tour]. We do festivals in the summer in mainland Europe and there are bigger crowds than this, but this certainly feels like the biggest tour we've done. Just the production level of it, and the lighting rig, the sound."

On whether MADBALL has been treated well as openers:

Brian: "It is not even about the input that we had, but they are treating us like… We haven't felt like this little 'piss-on' band. They've treated us like we're one of the three. We're being treated like we're here to play too. They've given us a light show; no one's limiting our decibel limit, nothing like that. We're getting treated like we're equal to these bands, and these bands are massive. It's a real honor."

On why hardcore has been able to survive various musical trends since the '80s:

Brian: "New York hardcore existed despite any trends in music. There was in the '80s the hair metal, then the '90s was grunge, and the 2000s was this stuff, the nu metal stuff. New York hardcore has always done its own thing."

On if there's a hardcore resurgence:

Brian: "I don't know about a resurgence. It's just we've never gone anywhere. We're always… and when I say 'we,' I'm not just talking about MADBALL. I'm talking about AGNOSTIC FRONT, SUICIDAL TENDENCIES, we're still running the flag up the pole every night. We've doing what we do for this long; those bands have been doing what they do for this long. It ebbs and flows. There's good periods and there's bad periods, but we do what we do. It exists despite whatever else is going on. We do what we do."

On the underlying thread of positivity found in hardcore lyrics:

Brian: "It's positive anger. It's release of anger. We want to see people down there getting out everything they had in their life that day and that week. Come to the show and get it out, have a good time, have fun, but let some of the aggression out."

On whether MADBALL is gaining fans by touring with KORN and LIMP BIZKIT:

Brian: "That's why we're here. I look at the faces out there and it's, like, we've done five of these shows, and tomorrow night is the last night. We got the center in there, and it might be 15 or 20 of them, it might be 50 or 60; it doesn't matter. I see our t-shirts in there and hardcore kids, and they're in that pit, getting it going. We give them all the credit in the world. This is a pricy ticket, especially if those kids aren't the type of people… maybe we're the only band they want to see. To spend that money to come see us, we're unbelievably flattered by that. I don't want to say that our fans wouldn't like KORN or LIMP BIZKIT. I like those bands. Over the years, it's not my main thing I listen to, but I respect those bands. I would listen to a band like that on my iPod. I'm saying that maybe our average fan, this is like, 'Oh, those guys are playing with them…' but for them to come out here and spend the money on the ticket and get in the pit and show us respect and go off for us, we are unbelievably grateful."