Rising British metallers MALEFICE have amicably parted ways with Anticulture Records, the label that issued the band's 2007 debut, "Entities". MALEFICE's second, as-yet-untitled album is now at final mix stage while the band puts the finishing touches to its new deal. The new CD was recorded by WellerHill, who also worked on "Entities". More information will be made available soon.

Commented MALEFICE lead vocalist Dale Butler: "We would not be in this great position if Anticulture hadn't taken on 'Entities' and brought us firmly to the public's attention."

Jodie from Anticulture stated: "We're very pleased to have our acts getting sucked up into the limelight like this. While we're sorry to see them go, it's great to be in this position. See you at Wembley, lads!"

MALEFICE will team up with Swedish powerhouse CORPORATION 187 for a UK tour beginning in early September.

MALEFICE recorded a live DVD on January 30 at The Wedgewood Rooms in Portsmouth, UK. Taken from the same show is the band's new video for "Dreams Without Courage" featuring a guest appearance by Justin Hill, formery of SIKTH. 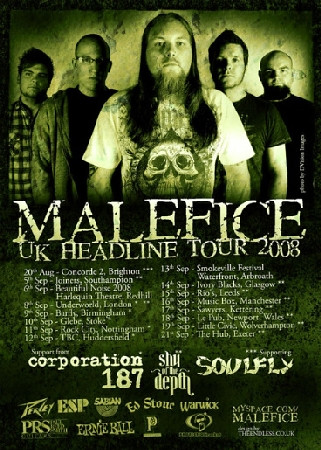 "Risen Through The Ashes" video: