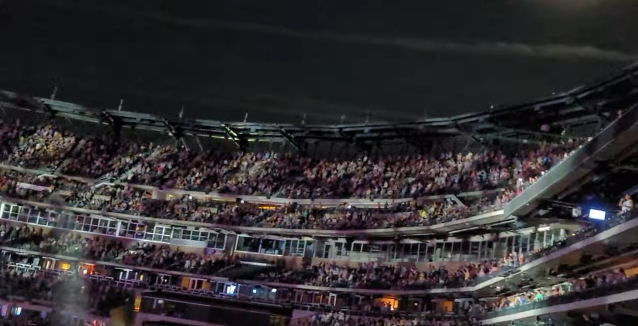 Man Falls To His Death At DEAD & COMPANY Concert

According to the Daily News, the man — said to be Brooklyn resident in his 40s — fell from an upper tier balcony to the concrete below during the show's intermission.

"He attempted a body flip, fell, and landed on the balcony below," a police source told the Daily News. The man was taken to New York Presbyterian Hospital in Queens, where he died.

A driver working outside at Citi Field told the New York Post he saw the man "flip" before he fell and slammed into the ground.

"He was unresponsive and he hit the ground head first. There was no way he survived," the driver said. "He was way too drunk. You could smell it. His brother came downstairs and found out he jumped. His brother was with him. He was crying."

DEAD & COMPANY's tour kicked off August 16 in Raleigh, North Carolina, and will run through Halloween, with a three-night stand at the iconic Hollywood Bowl on October 29, October 30 and 31. The 31-date tour also includes two nights in Boston (September 2 and September 3),two nights at Wrigley Field in Chicago (September 17 and September 18),and two nights in Denver (October 22 and October 23),among others.

DEAD & COMPANY was formed in 2015 when the GRATEFUL DEAD's Mickey Hart, Bill Kreutzmann and Bob Weir joined forces with artist and musician John Mayer, ALLMAN BROTHERS' bassist Oteil Burbridge, and FARE THEE WELL and RATDOG keyboardist Jeff Chimenti. The result was one of the most successful touring bands of the decade. Since its formation, the band has completed six tours, playing to 3.4 million fans, and has become a record-breaking stadium act. Having toured consistently since its 2015 debut, the band has grossed $255.5 million and sold 2.8 million tickets across 149 reported shows.

In between tours, DEAD & COMPANY hosts its annual "Playing In The Sand" all-inclusive Caribbean concert vacation in Mexico and features three nights of DEAD & COMPANY playing on an intimate beach. Due to overwhelming fan demand, a second weekend was added to 2022's Playing in the Sand. Both weekends have sold out.

Find more on The grateful dead