According to a post on the Facebook page of the Starland Ballroom in Sayreville, New Jersey, MANOWAR has announced its return to the studio to begin work on the band's next studio album. In order to concentrate on the as-yet-unnamed new disc, and "due to scheduling conflicts," MANOWAR has decided to postpone its previously announced U.S. tour dates in November. Tickets will remain valid and updates regarding new dates will be announced as soon as possible. Those who cannot attend the rescheduled concerts will be able to get a full refund.

"Kings Of Metal MMXIV", a re-recorded special version celebrating the 25th anniversary of MANOWAR's classic album "Kings Of Metal", was made available earlier in the year. The new recordings feature guitarist Karl Logan's and drummer Donnie Hamzik's contributions, who, after having played these classic hymns many times live, finally had the opportunity to add to their legacy by including their own signature sound and performance. The new album also featured movie and theater legend Brian Blessed ("Hamlet", "Flash Gordon") narrating "The Warrior's Prayer MMXIV".

MANOWAR released highlights of its "The Lord Of Steel World Tour" on a live EP, featuring performances from the Czech Republic, Finland, Germany, Italy, Russia and Sweden. The disc was mixed and mastered at MANOWAR's own studios Hell and Haus Wahnfried by Joey DeMaio personally with longtime MANOWAR engineer Dirk Kloiber. 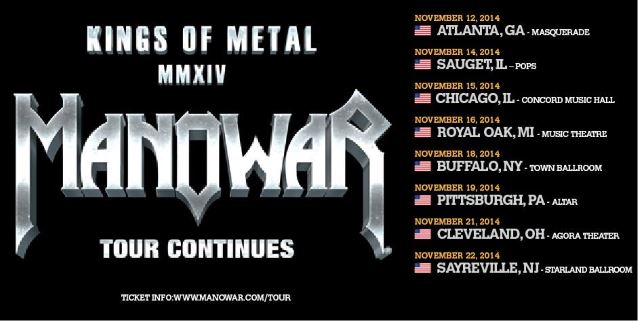