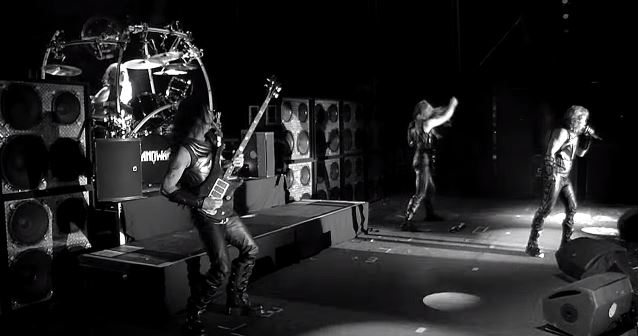 MANOWAR has released a video for the song "The Heart Of Steel MMXIV", taken from the band's thirteenth studio album, "Kings Of Metal MMXIV", released in February 2014. It's a re-recording of MANOWAR's 1988 LP "Kings Of Metal".

MANOWAR's upcoming "Gods And Kings" world tour will celebrate "Kings Of Metal MMXIV", which many fans haven't had a chance to experience live yet, as well as the upcoming anniversary of "Gods Of War", which was unleashed on the world in 2007. The setlist will be packed with fan favorites from both albums, plus many other classics and special surprises.

MANOWAR last year postponed a U.S. tour "due to scheduling conflicts" with the band's return to the studio to begin work on its next album.

"Kings Of Metal MMXIV", a re-recorded special version celebrating the 25th anniversary of MANOWAR's classic album "Kings Of Metal", was made available last year. The new recordings feature guitarist Karl Logan's and drummer Donnie Hamzik's contributions, who, after having played these classic hymns many times live, finally had the opportunity to add to their legacy by including their own signature sound and performance. The new album also featured movie and theater legend Brian Blessed ("Hamlet", "Flash Gordon") narrating "The Warrior's Prayer MMXIV".

MANOWAR released highlights of its "The Lord Of Steel World Tour" on a live EP, featuring performances from the Czech Republic, Finland, Germany, Italy, Russia and Sweden. The disc was mixed and mastered at MANOWAR's own studios Hell and Haus Wahnfried by Joey DeMaio personally with longtime MANOWAR engineer Dirk Kloiber.