An interview with MANOWAR guitarist Karl Logan about the newly released "Magic Circle Festival Volume II" DVD can be viewed below.

From Wednesday, July 9 until the sunset on Saturday, July 12, 2008, 35,000 true metal fans (over the course of the entire festival) from 44 different countries across the globe poured onto the festival grounds in Bad Arolsen, Germany and experienced the ultimate in true heavy metal: the second annual Magic Circle Festival. Now you can experience the power, the passion and the excitement of those four days with the "Magic Circle Festival Volume II" DVD.

Released on November 27, 2008, "Magic Circle Festival Volume II" features two discs packed with never-before-seen footage of songs from the first six MANOWAR albums — including some songs that have never been performed or presented on CD or DVD before. This is the first opportunity to get songs like "Blow Your Speakers", "Death Tone", "Pleasure Slave", "Violence and Bloodshed" and "Kingdom Come" on DVD. This DVD also includes the first-ever live performance of MANOWAR's epic "The Crown and the Ring".

The DVD set was mixed by Grammy nominee Rich Breen in full 5.1 Surround Sound and will be available in a special-edition package. The special limited-edition package is available for pre-order at "The Kingdom of Steel" online store and comes complete with a unique steel book case and a 32-page booklet. An even more limited autographed edition of 100 serial-numbered copies is also available and can be personalized to each fan by MANOWAR themselves.

MANOWAR bassist Joey DeMaio has revealed long-awaited details about a secret project. He announced that next year MANOWAR would perform its new (as-yet-untitled and unreleased) album onstage. And it is not just a normal album... it will be written in collaboration with the biggest-selling German author Wolfgang Hohlbein (over 35 million books sold),and will include a tie-in novel and feature film and video game. When Wolfgang appeared onstage during MANOWAR's Saturday performance at this year's Magic Circle Festival, he was joined by his manager Dieter Winkler and close friend Ralf Buxa. 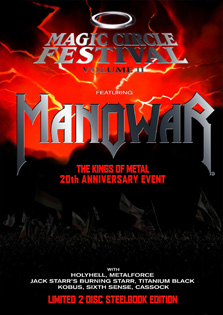