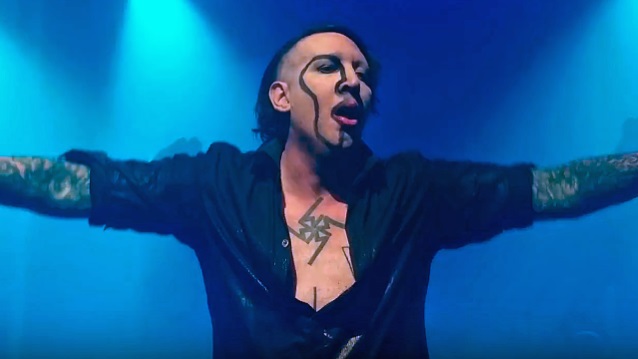 Marilyn Manson performed a lackluster and abbreviated set last night (February 15) at The Paramount in Huntington, New York, causing many fans to lash out at the singer on social media demanding a refund.

Thursday night's concert was a make-up date for a show that was originally supposed to happen last October but which ended up getting postponed after Manson broke his right leg in two places.

According to Newsday, Manson had his back to the crowd for most of the set and seemingly confused his own band by his actions as several songs were started and stopped. He also mumbled incoherently at one point and appeared to improvise bizarre lyrics.

"I started this conversation with 'I love you'," Manson told the audience, according to reports. "Keep in mind that you guys didn't say it back."

"Did you guys have a fucking, terrible, Valentine's Day or what?" he continued. "C'mon, guys. Give me some noise! I don't know how your parents raised you, but my parents are dead, so you can't blame my parents, they are dead. When somebody says 'I love you,' you say it louder."

Most of the fans were apparently unimpressed, with one fan writing in his recap of the show on Instagram: "Manson came out with a bang but the whole thing deteriorated very quickly. Once it got to be 10 minutes of begging for adoration and no music, I think we all started to realize something was wrong. Once he was temporarily satisfied, it didn't improve. They would start songs only to screech them to a halt a minute in. There were very drawn-out versions of songs where Manson mostly rambled on about our lack of love and other bizarre things. After an hour and fifteen minutes of this, he threw his microphone and left the stage."

Another concertgoer told Newsday that Manson "was too messed up and couldn't perform. It was disappointing."

"You can't even call this a show," a third fan said. "I've been a fan since I was five years old. I grew up listening to him, but he's dead to me at this point."

A number of people who went to the concert took to social media to express their displeasure and to ask for their money back.

"@Ticketmaster I want a refund for the 2 tickets I bought to the @marilynmanson concert tonight @TheParamountNY," one fan tweeted. "$180+ special t on 2 tickets to a rescheduled show & we get him walking off stage midshow? This is unacceptable"

Another person wrote: "Marilyn Manson put on the WORST show I have ever seen. Played 5 songs, bitched about people not saying “I Love You” and walked off #MarilynManson #worstconcert #refund"

Marilyn is on the road supporting his latest album, "Heaven Upside Down", which was released in October.

Manson's injury to his lower leg from a freak accident on stage during a concert last fall in New York City resulted in the postponement of nine tour dates.

Tried seeing Marilyn Manson tonight. We have seen him on 4 other occasions and always entertained. This time due to being so drugged, drunk, or sick unfortunately this concert was a complete failure. I know what you’re going to say but it is sad to see a complete spiral downward of a human due to drugs. Which might have been from his accident a few months ago. Marilyn please get the help you need and we will see you next time and we do love you 🙁 #marilynmanson

@Ticketmaster I want a refund for the 2 tickets I bought to the @marilynmanson concert tonight @TheParamountNY. $180+ special t on 2 tickets to a rescheduled show & we get him walking off stage midshow? This is unacceptable

Marilyn Manson put on the WORST show I have ever seen. Played 5 songs, bitched about people not saying “I Love You” and walked off #MarilynManson#worstconcert#refund

Refund! Concert was a disgrace.

Yo @marilynmanson has got me fucked up right now how do you just walk off? @TheParamountNY@TMfanSupport refund please

@Ticketmaster@TheParamountNY@marilynmanson
no more rescheduling. refund.
not risking a 3rd time.

Only way to recover from a terrible @marilynmanson concert... $20 worth of tacobell. Refund please. #MarilynManson

@TheParamountNY How do I go about receiving a refund to last night’s Marilyn Manson walk off show? 4 tickets Section 210 Row F Seats 1-4.

@marilynmanson Last night's bullshit at @TheParamountNY was completely inexcusable, unprofessional and unacceptable. Fuck that shit. I want a refund @Ticketmaster
The audacity to berate the crowd for no reason, then walk off stage. I speak for everyone there: never see you again