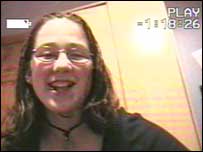 Nicola Stow of Edinburgh Evening News is reporting that the jury in Scottish murder trial was today (Jan. 6) shown paintings by rock star MARILYN MANSON depicting the horrific murder of a young woman.

Detective Constable Adam Brunton told the court he was asked to carry out research on Internet sites relating to MANSON as part of the murder investigation.

He told the court he discovered the pictures, which featured in the singer's "Golden Age of Grotesque" exhibition, on the star's website.

The trial at the High Court in Edinburgh has already heard how accused Luke Mitchell bought a MANSON CD two days after his girlfriend's body was found.

Mitchell denies murdering 14-year-old Jodi Jones (photo) on June 30 2003 at a wooded area near Roan’s Dyke, between the Newbattle and Easthouses areas of Dalkeith, Midlothian.

The MANSON images relate to the killing of young American woman Elizabeth Short in 1947, known as the Black Dahlia murder.

Among the watercolours featured on the website was MANSON's depiction of Elizabeth Short's body cut in half at the stomach. Another showed the woman with a huge gash to her mouth extending to her ear.

Referring to the pictures in court today Alan Turnbull, QC, prosecuting asked Mr Brunton: "Do we see that the paintings include some views of a body more or less cut in half?" Mr Brunton agreed.

The jury was then shown four separate paintings in MANSON's Elizabeth Short Series.

The first was entitled "Elizabeth Short as Snow White (a smile 1)", which showed a painting of Miss Short's face without any injuries.

The next painting to be shown on the screen of the courtroom was entitled "Elizabeth Short as Snow White (a smile 2)" .

This picture showed Miss Short with facial injuries, including wounds to her forehead and, as Mr Turnbull pointed out "more obviously large wounds on the sides of her mouth which stretched towards her ears".

The third picture to be shown to the jury was called "Elizabeth Short as Snow White" with the subtitle "Now a Special Sort of Death for One So Fair".

The picture was a graphic image of the injuries she sustained when she was killed. These included an injury to her right breast and where she was cut in half at the stomach.

The final image — "Elizabeth Shaw as Snow White You’re Sure You Will Be Comfortable". This again showed injuries to her face, breast and stomach.

Mr Turnbull said: "All of these paintings are for sale and relate to what became known as the Black Dahlia murder, which remained unsolved?" Mr Brunton replied: "Yes, that is correct."

The court also heard that MANSON describes the Elizabeth Short Series as "my favorite part of the show" on the website. Read more.