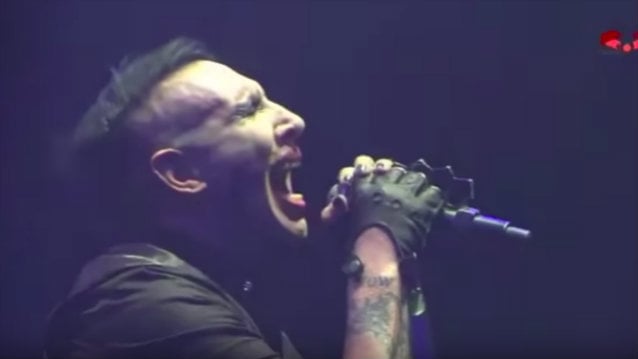 MARILYN MANSON 'Will Be Back In Action Soon,' Says His Bandmate

Marilyn Manson "will be back in action soon" following an incident Saturday night when he was injured after a stage prop fell on him while he was playing in New York City.

The accident happened about forty-five minutes into Manson's set at Hammerstein Ballroom as tried to climb the prop — consisting of two enormous fake pistols — which was almost double his height. The huge prop toppled and knocked Manson to the stage.

A spokesman for Manson confirmed the singer was hurt and was being treated at a local hospital.

Manson's bandmate, producer and film composer Tyler Bates, who plays guitar and keyboards in Marilyn's group, offered an update on the singer's condition in an Instagram post early Sunday morning. He wrote: "Well, the Marilyn Manson 'Heaven Upside Down' tour is on pause for a minute. Heading home. Manson will be back in action soon. 'Heaven Upside Down' is released October 6th, with an insane video to stoke the fire. See you soon!"

His new album, "Heaven Upside Down", sees him reunited with Bates following an epic collaboration on Manson's critically acclaimed 2015 release, "The Pale Emperor".