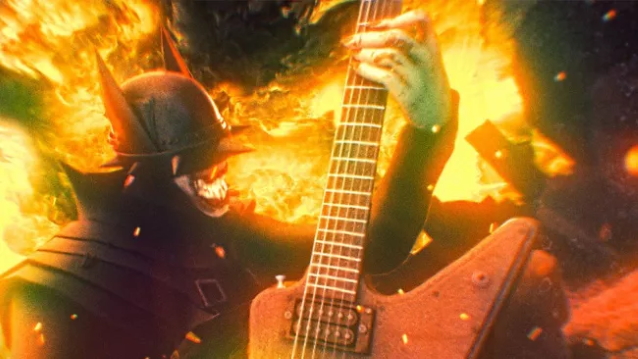 Composer Tyler Bates will produce and write music for the DC Comics' "Dark Nights: Death Metal" soundtrack, an inventive new project featuring songs inspired by the forthcoming seven-part comic book series written by Scott Snyder and illustrated by Greg Capullo. Due out this year via Loma Vista Records, the soundtrack album will also contain animatic score sequences related to each issue of the series that will feature guest musical artists and voice talent.

An animated/motion comic music video promoting "Dark Nights: Death Metal" — wrapped up in the 2015 MARILYN MANSON song "Warship My Wreck" — is available below.

"Get ready for the earth-shattering encore! The legendary team behind 'Dark Nights: Metal' and 'Batman: Last Knight On Earth' take center stage and reunite for one last tour," reads DC's announcement of the trailer.

"When the Earth is enveloped by the Dark Multiverse, the Justice League is at the mercy of the Batman Who Laughs. Humanity struggles to survive in a hellish landscape twisted beyond recognition, while Batman, Wonder Woman, and Superman have all been separated and fight to survive. Unleash the beast and let the head banging begin!"

Bates co-wrote and produced MANSON's 2015 epic "The Pale Emperor". As the band's lead guitarist, he dedicated over a year to touring in support of the album on the headline "Hell Not Hallelujah" tour. In 2017, he once again joined forces in the studio with MANSON on the follow-up album "Heaven Upside Down" and returned to the road for a string of high-profile touring.

Bates regularly transitions from scoring some of the world's biggest film and television franchises, such as "Guardians Of The Galaxy" and "John Wick", to rocking massive audiences with MANSON, and back to the studio again writing and producing. In 2004, he made waves by creating the menacing audio backdrop for the popular Zack Snyder reboot of "Dawn Of The Dead", followed by his soundtrack for the filmmaker's "300". His oeuvre expanded to include films like "Watchmen", "Sucker Punch", "The Devil's Rejects" and "Halloween I" and "Halloween II", and TV shows like "Californication", "Kingdom", "Salem", "The Purge" and more. More recently, Bates scored the blockbuster "Fast & Furious Presents: Hobbs & Shaw", "Deadpool 2", "Atomic Blonde", "The Spy Who Dumped Me", Genndy Tartakovsky's acclaimed animated series "Primal" on Adult Swim, "Stumptown" on ABC and the second season of "The Purge" on USA network.