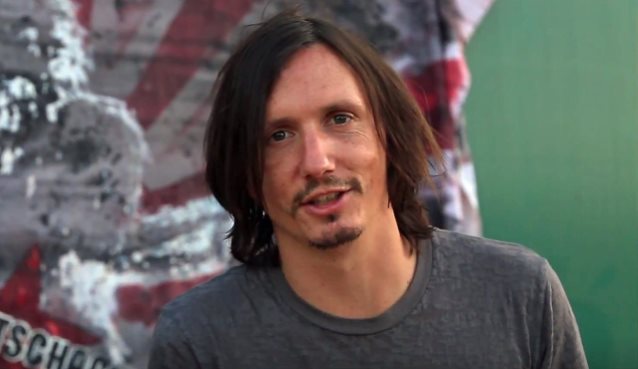 Mulatschag TV recently conducted an interview with drummer Mario Duplantier of French progressive metallers GOJIRA. You can watch the full interview below. A few excerpts follow (transcribed by BLABBERMOUTH.NET).

On whether he gets "bored" playing with other guitarists, including his brother Joe [also of GOJIRA]:

Mario: "[Laughs] I love to play with my brother because we have this osmosis together. It's easy for us to jam. We don't have to talk; he's an excellent guitarist and I love the way he plays. We have this synchronization together. I feel it's very unique. Yeah, I don't want to play with other guitarists."

On his upbringing in Ondres, France:

Mario: "[It's] by the ocean, the mountains. We grew up in a big house. Actually, you can see our house in the [GOJIRA] video clip called 'Low Lands'. You can see the house with the camera on the sky. You really feel the vibe. It's in the middle of the forest. We were just hanging outside all day long, no neighbors, so it was easy to make noise. When we started the band, it wasn't a problem. We got a [rehearsal] room, we could practice even in the night if we wanted. It's five minutes from the ocean. It's very close to the mountains. It's a very natural place."

On GOJIRA's long-delayed EP in support of the anti-whaling Sea Shepherd Conservation Society:

Mario: "We just wanted to put a spotlight on them, so Joe had this idea of doing an EP and selling the EP and all the money goes to them, to help them. Finally, we started working in the EP, but the hard drive crashed. We couldn't [finish] the project, but we're still working on it. The goal was to talk about them. They work, they fight for something very important, we feel. We respect them so much, so that was a goal."

On who he'd like to be in a side project with:

On writing and recording the band's 2016 "Magma" album in their new home base of Brooklyn, New York:

Mario: "I went to Brooklyn to spend time with my brother to work on a new album every day, every day to be able to work on every detail of the band, the visuals, the video clips, the discussion around management, compositions, everything. I spent two years over there just working every day just working with him over there working on the new album, 'Magma'. It was an amazing experience, but for technical reasons, I went back to France for one year, but now I moved back with my family. Also we have an American passport because our mother was American, so it's easy for us to travel over there because we know it's a big deal to stay in America. With a passport, it's easier."

On whether he could picture a "cyborg" version of BLACK SABBATH appearing in 50 or 100 years:

Mario: "[Laughs] It's a bit crazy. I prefer not to think about it. We are already a bit overwhelmed… I don't know the word, but it's a bit too crazy, even myself, I cannot control myself on my phone, checking my Instagram. I'm a bit worried about myself sometimes. I'm a bit worried about the attention people [have] lost. You cannot really have a conversation sometimes without a phone ringing and that interaction through technology. It will be very important to find a balance, but it's not easy because phones are everything now. You can go so far with it, so I don't know how to control it. It's incredible and a nightmare at the same time. We are always nostalgic and old school. We resist a little bit, maybe not everyone, but me, I'm always resisting complaining about new technology. But maybe we should embrace it and accept and try our best to live with it."

"Magma" was released in June 2016 via Roadrunner Records.