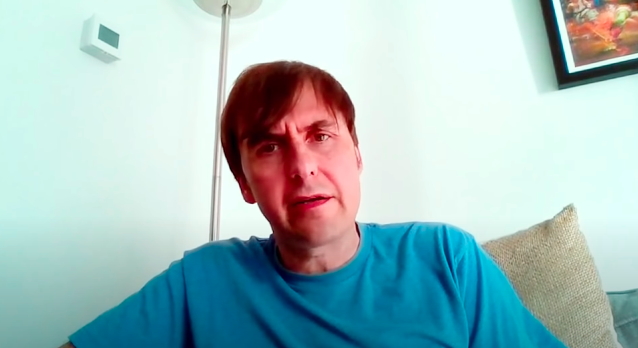 "Mitch plays 50 percent of the guitar tracks on the album, and Shane [Embury, bass] does the other 50 percent," he said. "But Mitch didn't write any music for this album, but he did play. Because the dynamic that's created by his style and Shane's style, when you put the two together, is quite an interesting dynamic."

Asked who is playing guitar for NAPALM DEATH on tour, Greenway said: "John Cooke, who, I believe, did do a South American tour with us, so if you went to one of the gigs, you may have seen him. He basically plays live guitar. He did a couple of bits on the album as well — small, small parts."

Harris, who lives in Las Vegas, Nevada, has been taking a leave of absence from NAPALM DEATH since late 2014 to focus on his family life.

In a recent interview with Rock Titan, Mitch discussed his status with NAPALM DEATH while promoting "Scarcity", the debut album from his BRAVE THE COLD project, also featuring MEGADETH drummer Dirk Verbeuren.

Harris said: "I flew over [to England] and [recorded] guitars [for 'Throes Of Joy In The Jaws Of Defeatism']. I was there for a week. Shane had so much material. I saved my [original] material for BRAVE THE COLD in the end. Long story short, I wanted to help my bros. I wanted to see my friends and family. And [producer] Russ Russell — he's one of my closest people. And I can't see a NAPALM record without him. I mean, I miss working with him as well.

"It was two years ago or more [that I laid down my tracks], actually — just after my mom died. [Before she passed away,] she [was], like, 'I want you to do the NAPALM album and BRAVE THE COLD and do your own thing. Do it. Follow your music and just make it happen.' Soon after, I got back to work. Me and Dirk started jamming, and then they sent me over to England to do [the NAPALM album].

"I'm glad I brushed up on guitar," he added. "I mean, I'd been playing, but not like I used to. Suddenly I was in better shape for the NAPALM record, which was good, 'cause it was more physically demanding, actually. BRAVE THE COLD is a little more — I don't know — vocal-driven."

Back in the summer of 2018, Greenway told TotalRock Radio that Harris was still a member of the band. "Basically, Mitch went on hiatus, just because of circumstances," he said. "Officially I can say that he has played on the new album — the brand new album. Because here's the thing: everybody was, like, 'Oh, Mitch hasn't played with you in three years. He must be out of the band.' We were, like, 'Look, if he's out of the band, we'll let you know. But he isn't.' And nobody believed us. Well, not nobody, but a lot of people were, like, 'No. This can't be right.' We were, like, 'Look, he's on hiatus. He's dealing with some quite serious stuff. So, please.' And so, yeah, he has played on the new album. What will happen above and beyond that, I'm not sure yet. But, yeah, he's played on the new album."