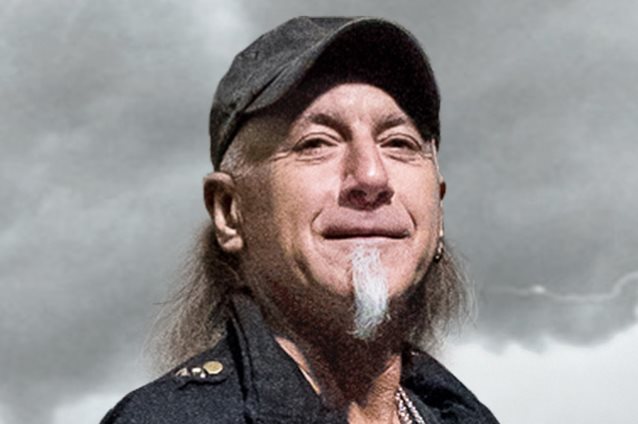 Australia's "The Moshpit Backstage" podcast recently conducted an interview with vocalist Mark Tornillo of German/American metal veterans ACCEPT. You can listen to the full chat below. A few excerpts follow (transcribed by BLABBERMOUTH.NET).

On whether new ACCEPT members Christopher Williams (drums) and Uwe Lulis (guitars) contributed to the band's new album, "The Rise Of Chaos":

Mark: "Oh yeah. Everybody contributes. You know, obviously, not as much as Wolf [Hoffmann, guitar] and Peter [Baltes, bass]. They are the 'head chefs,' so to speak. They've always been the songwriters in ACCEPT and it will pretty much remain that way, I think, but everybody has their say. But, the best part of Christopher and Uwe is that we're just, you know, a bunch of happy guys on the road now. It's quite wonderful onstage and wonderful backstage. We're all getting along very well and really enjoying our time together."

On his lyrical approach to "The Rise Of Chaos":

Mark: "'The Rise Of Chaos' itself, that song, in particular, that song was kicking around and we really didn't have something that worked for it. And when Wolf came up with the idea of the title for the album, we sat back and said, 'Hey, there's the song. There's the title for the song. That's what we've been looking for.' And it fit right in there. After that, it was a no-brainer. Just look around. [Laughs] We're in a lot of trouble here. It's not hard to write songs about things that you're watching on the news every day and things that are happening in the world. We're a product of our environment. You just try to make points and get people to think, is basically what I do."

On how the members of ACCEPT view the issues that are currently affecting the world:

Mark: "We are basically a global band. Uwe still lives in Germany, Peter and Wolf, obviously, are German. We're on a German label [Nuclear Blast], our management is in Germany. Most of us do live in the United States, but we think globally. We travel the globe constantly, so you really have to be aware of what's going on everywhere in the world, not just your backyard. So, yeah, I think we're all quite conscious of the things that are going on everywhere. We try to be, anyway."

Mark: "It was just a freak thing, man, really. Peter and Wolf were in a studio in New Jersey, not far from where I live and they were doing some work and they were talking about possibly putting the band back together with [original vocalist] Udo [Dirkschneider] at that time and he pretty much turned them down. They were remarking about, actually Peter was recording his son's album, he was producing a record for his son and Wolf happened to be up here visiting and they were just talking about the fact they would like to put the band back together, this and that. The guy who owned the studio knew me and said, 'Why don't you give Mark a call?' And they were, like, 'Mark who?' And he mentioned [Mark's previous band] TT QUICK and we had opened for ACCEPT back in the '80s in the U.S., one show in particular, and I guess something rang a bell and Peter gave me a call and asked me if I wanted to come out and jam with them and that was it. I went down there, we jammed, and two weeks later they called me and asked me if I wanted to do a record and a tour. I really didn't think anything was going to come of it."

On whether he was a fan of ACCEPT prior to joining the band:

Mark: "I was a fan back in the '80s, in the early days. TT QUICK covered ACCEPT songs before we had a record deal. I actually turned a lot of people on to ACCEPT. We would cover 'Son Of A Bitch' and 'Flash Rockin' Man'. People would say, 'What is that?' 'That's original stuff that we wrote.' 'No! [Laughs] That's a German band called ACCEPT.' But yes, I was a fan by all means. Still am."

On whether he was nervous taking over the vocal position in ACCEPT:

Mark: "Oh, hell yeah! I was extremely nervous, especially due to the Internet because the Internet, you know what everyone's thinking right away. It's not like the '80s or the old days where you never got to hear what the audience thought. You just read the magazines and so did they and that was it. Now, with the Internet it was quite obvious that people were not happy with this decision, so I was, like ,'Uh…okay! Here we go. It's on.' That's why we decided right off the bat that we would go in and record, try and make the best possible album we could make, which was 'Blood Of The Nations'. Instead of just going out and resting on the laurels and playing their old material, we had to be a viable, new band. And we tried our damndest to be and I think it's working. 'Blood Of The Nations' surprised a lot of people and I felt a whole lot better after that came out, for certain. But yeah, it was trying, let's put it that way."

"The Rise Of Chaos" was released on August 4 via Nuclear Blast.