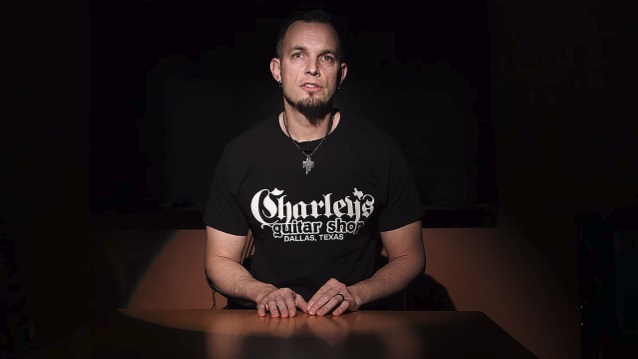 MARK TREMONTI: VINNIE PAUL 'Left Behind Such A Great Legacy'

TREMONTI members Mark Tremonti and Eric Friedman have commented on the passing of Vinnie Paul Abbott. The former PANTERA drummer reportedly died in his sleep at his home in Las Vegas on Friday, June 22.

Speaking to Metal Wani earlier today (Saturday, June 23) at the Hellfest festival in Clisson, France, Eric said (hear audio below): "It's rough, man. It's always tough to see someone go that has always inspired you and has always been there; you can see them at a local show or see them at the NAMM show. But for us, this one hurt us. Garrett [Whitlock], our drummer, is a really, really, really big Vinnie Paul and PANTERA fan — he's got 'PANTERA' tattooed on his leg. We can just hope that they can live on in all of us and the people they have inspired along the way. And he's with his brother now, so…"

Added Mark: "I had the honor of being able to hang out with [Vinnie] a few times. He was always such a gentleman, such a nice guy, such a positive spirit. He left behind such a great legacy.

"When you hear news like that, it's like getting punched in the gut; you can't believe it," he continued. "I'm still not over what happened with Chris Cornell; that really hit me extremely hard. And today is just… It hasn't even sunk in yet. We woke up and we hit the stage a couple of hours later. So I think later on tonight, we'll have some drinks and it'll really sink in."

Vinnie Paul Abbott's body has been turned over to the medical examiner to determine a cause of death, and after that, he will be flown back to his home state of Texas to be buried between his mother and brother.

Not long before his death, Vinnie laid down the drum tracks for HELLYEAH's sixth album at The Hideout recording studio in Las Vegas. It is not presently clear when those recordings will see the light of day.

TREMONTI's fourth album, "A Dying Machine", was released on June 8 via Napalm Records.