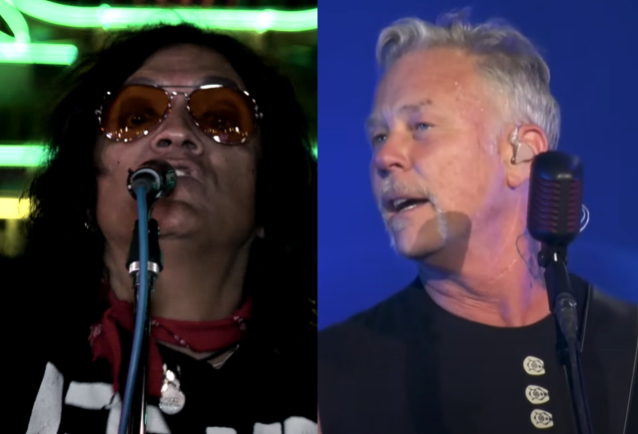 In a new interview with Radioactive MikeZ, host of the 96.7 KCAL-FM program "Wired In The Empire", BULLETBOYS frontman Marq Torien recalled hanging out with members of METALLICA in the 1980s while both bands were on the rise on the California hard rock and metal scene.

"I love [METALLICA frontman] James Hetfield," Marq said. "He was a big champion for the BULLETBOYS when we first started playing and would come to all of our shows when we played up north. He would come walking in, and he would hang with us, love on us, drink some whisky and beer with us and stay there through the whole show."

He continued: "When we started playing up in 'Frisco, we played at a place called The Stone, and he was always there to come and see us. He said that [the first BULLETBOYS] record [blew] his mind because he didn't think a band could come out and have that sound. He goes, 'The sound that you have and Ted Templeman.' And he said, 'This record is gonna last forever.' We laughed, 'cause he goes, 'No, no. no. Listen to me.' And that's young James — with his moustache, handlebar moustache, full of piss and vinegar. He's looking at us with that look in his eyes, and it was kind of scary. He goes, 'Dudes, I'm telling you right now. Don't eff this off. This will be for the rest of time, this album. I know you idiots don't know it right now, but I'm telling you, this is one of the greatest rock records that I've ever heard.'

"I love METALLICA," Marq added. "Back in the day, my place to go was The Troubadour because at the front bar you'd get the hottest chicks. We were all young, and all the big stars would hang out there. And when METALLICA was first starting, that's where they would hang out… They used to hang out with all of our friends. And everybody at one point used to hang out with them, and they were really good people. They were a full thrash band, though, when they first came out. It was like something that you'd never heard before. It was very, very dangerous. They didn't care. Cliff Burton [bass] was in the band, and Cliff, for all intents and purposes, he was the guy writing the songs with James."