MARTY FRIEDMAN Announces 'Wall Of Sound' U.S. Tour With SCALE THE SUMMIT And THE FINE CONSTANT

Following last week's album announcement, former MEGADETH guitarist Marty Friedman has now unveiled his headlining tour in support of his latest scorcher, "Wall Of Sound". The 22-show trek will feature support from Houston's top progressive outfit SCALE THE SUMMIT along with Madison, Wisconsin-based technical progressive three-piece THE FINE CONSTANT. The tour kicks off in Philadelphia on August 2, just two days before "Wall Of Sound" is released.

Friedman comments: "We're coming to you direct from Tokyo, to make you smile or make you cry, or even drag you up on stage with us. What's for sure is that we will definitely get your blood pumping."

About the band, Friedman states: "Kiyoshi is the most aggressive bassist on the planet. You will either fall in love with her, admire her skills or both. Jordan Ziff is an up-and-coming guitar superstar. The youngest of the select few who have played beside me in the band. Anup Sastry (on the first week of the USA tour) played drums on 'Inferno' as well as 'Wall Of Sound', and is the most innovative young drummer I've ever seen. Chargeeee (on the remainder of the USA tour) has been my touring drummer for eight years — he steals the show from me every night. He has an inhuman amount of energy."

U.S. fans who preorder Friedman's new album at Prosthetic Records' official store will be entitled to a VIP meet-and-greet for one of the dates below. Once ordered, please email [email protected] with your order number and what date you would like to attend. Please note, tickets to the show will still need to be purchased. The pre-order VIP offer will expire on June 30 at which time VIP packages will only be available at MartyFriedman.com.

"Wall Of Sound" will be released on August 4 via Prosthetic Records. Produced by Friedman, engineered by Paul Fig (GHOST, RUSH, ALICE IN CHAINS) and mixed by Jens Bogren (KREATOR, OPETH, SEPULTURA),the disc "expands and destroys any conventional notions of instrumental music," according to a press release. Legendary QUEEN producer Mack came on board to handle the mixing on two tracks, "Streetlight" and "For A Friend", which Friedman proclaimed was "an honor for me, for sure." 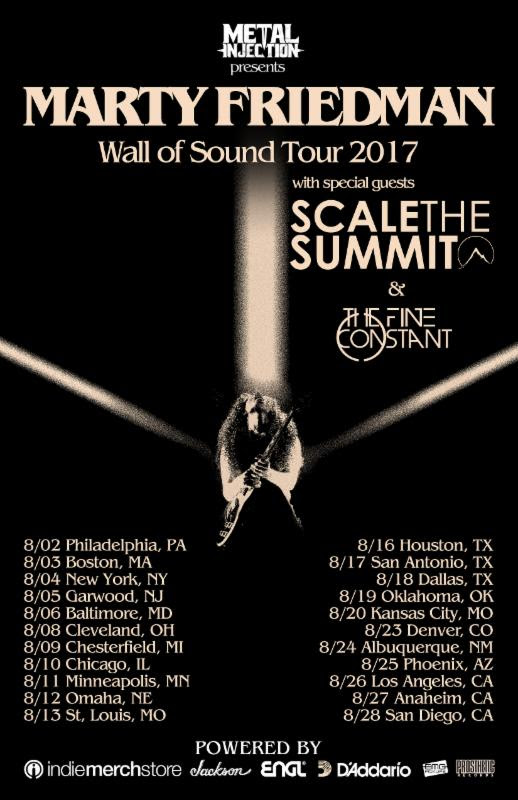