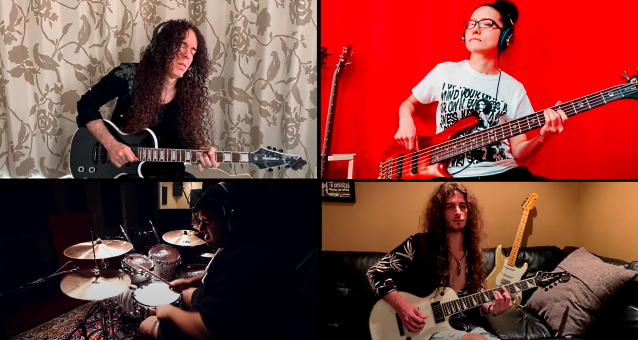 Former MEGADETH guitarist Marty Friedman has released a "Home Jams" version of his song "Self Pollution", which originally appeared on the 2017 album "Wall Of Sound". The new rendition of the song features Friedman, along with his longtime bandmates Kiyoshi (bass) and Jordan Ziff (guitar), plus Anup Sastry (drums). The split-screen video was filmed in Tokyo, Osaka, Phoenix and Baltimore, with each musician separated in his or her home.

Last December, Friedman told "Everblack Media" about the members of his touring solo group: "I'm sure everybody's going to love my band. They might come to see me, but when they leave that concert, they're going to be more excited about my band than they are of me, because they outshine me every single night... There are certain people around the world who are able to do what is necessary in my band and have gone through extensive, intense training to do it... They've gone through such incredible training to do such a thing. The top priority is that they have to get more attention than I do when we play. They can't just be there in the background — they really have to play, and they really have to be there."

Speaking about his audition process, Marty said: "Musical ability has to be pretty much taken for granted. It's beyond that. It's like a showmanship-type of thing. It's kind of an attitude. I think Kiyoshi is a perfect example — she's got her own thing. When she plays, she's not just mimicking what I'm doing — she's doing her own thing that works in my music really well, and the same thing [is true] with my guitarist and drummer as well. The audition process, it's quite crazy. It's quite difficult, I think, for the people who want to do it. There are many people who have the musical ability to do what I need, but beyond that, it's stamina, it's image and appearance. There are people that play fantastically, but maybe they look like they work in a bank or sell insurance. That's not going to work. I really want them to take a lot of the attention — I want every person to take an equal amount of attention, so it feels like a band... [and so that] nobody walks away from the concert feeling like there was a weak link in there."

"Wall Of Sound" was released in August 2017 via Prosthetic Records. Produced by Friedman, engineered by Paul Fig (GHOST, RUSH, ALICE IN CHAINS) and mixed by Jens Bogren (KREATOR, OPETH, SEPULTURA), the disc "expands and destroys any conventional notions of instrumental music," according to a press release. Legendary QUEEN producer Mack came on board to handle the mixing on two tracks, "Streetlight" and "For A Friend", which Friedman proclaimed was "an honor for me, for sure."