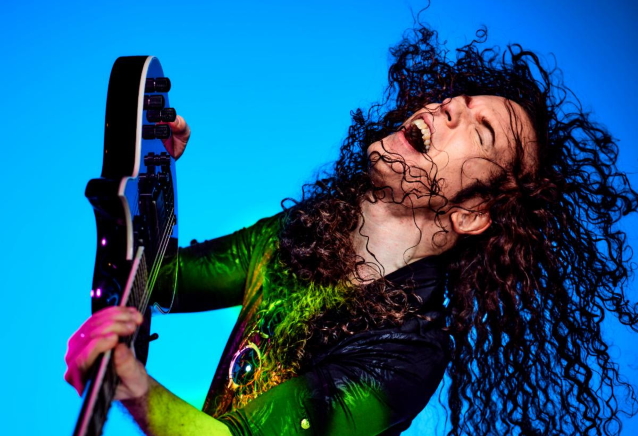 Former MEGADETH guitarist Marty Friedman, who has pursued a solo career for most of the past two decades, spoke to Heavy New York about how he has developed as the frontman of his solo band during that time. He said (hear audio below): "It comes naturally [from] touring and stuff like that. I've been touring since I've been a teenager, in all kinds of different capacities. But ever since I started touring on my solo music, which started around 2002 or so, as a frontman for instrumental music, first of all, I was never a frontman — I was always a guitar player. So I never thought about interacting and having to talk. So when I started touring, it was very awkward, and we just got to playing the music and finished up. And I'm finishing tours and going, 'What can I do?' It was just awkward."

He continued: "I hate talking. I just wanna play. And then the more I toured, and the more of a strong band I assembled, I started to get more balls to try to sort of, 'Okay, well, I'm gonna have to be a frontman here. And frontmen kick ass. And I might be playing good, but I'm talking like a freakin' idiot.' And when I did my first live album, the 'Live In Europe' record, that's when it hit me like a ton of bricks. All the raps between songs just sucked; they were horrible. And I wound up editing most of them out. So if you listen to that live album, it's okay, but there's maybe a sentence of talk between the songs; it just really sucked. And that kind of lit a fire under my ass for the next couple of tours, and that was around 2008. So once the 'Loudspeaker' tour was finished and then I started touring on the next couple of records, I started really trying to get out of my shell. And then the 'Inferno' and 'Wall Of Sound' tour really, really got me a lot more confident.

"I feel really comfortable talking, and you can hear that on the live album that we just released, the 'One Bad M.F. Live!!' record," Marty added. "You can actually hear that I'm sort of kind of a semi-half-assed frontman, which is speaking a lot for me. I was very pleased with that."

According to Friedman, interacting with an audience is not something you can really prepare for. "You can't practice it — you just have to tour it and feel it," he explained. "And sometimes you just say stupid shit, 'cause you've got a lot on your mind, and you're full of adrenaline. And stupid shit can come out, and when it does, there's nothing to do about it, 'cause it's already out. A mistake on the guitar not a whole lot of people notice, but if you start spouting off bullshit, people really notice it.

"I find that people are used to hearing my guitar playing, but not a lot of people, on tour, are used to hearing me talk, so they listen pretty closely to what I'm saying," he continued. "And I don't really have a lot of social commentary to say — I wanna get to the music — so it's taken a long time to get halfway decent, where I'm not embarrassed. And that's where I'm at now."

Marty will host a special livestream experience on New Year's Day (January 1, 2021) at 9:00 p.m. local time from Tokyo, Japan where he has resided for the past 17 years. The live concert will take place in a new multi-dimensional visual atmosphere designed specifically for this show by cutting-edge Japanese motion graphics creator Nobuyuki Hanabusa. Friedman will be joined by his Japanese band — which consists of drummer Chargeee, bassist Toshiki Oomomo and up-and-coming guitar wunderkind Naoki Morioka. Tickets are on sale now at this location.

Marty's latest solo album, Tokyo Jukebox 3", was released in October in Japan. According to Billboard, the LP features Marty's cover versions of a wide variety of pop songs, including such contemporary numbers as LiSA's "Gurenge" and OFFICIAL HIGE DANDISM's "Shukumei", along with DA PUMP's dance track "U.S.A.", END OF THE WORLD's ballad "Sazanka", and the vocaloid hit "Senbonzakura Feat. Hatsune Miku". Some throwback J-pop hits from the '90s are included on the set as well, such as ZARD's "Makenaide" and EVERY LITTLE THING's "Time Goes By".

As previously reported, Marty's long-awaited documentary, titled "Spacefox", will tentatively arrive in 2021. The film, which is being directed by Jeremy Frindel, the founder of Substratum Films, follows Friedman's reinvention from lead guitarist in MEGADETH to one of the most famous TV personalities in Japan.

This past June, Friedman released a "Home Jams" version of his song "Self Pollution", which originally appeared on "Wall Of Sound". The new rendition of the song features Friedman, along with his longtime bandmates Kiyoshi (bass) and Jordan Ziff (guitar),plus Anup Sastry (drums). The split-screen video was filmed in Tokyo, Osaka, Phoenix and Baltimore, with each musician separated in his or her home.

Friedman's latest record, "One Bad M.F. Live!!", came out in October 2018. The album was recorded in Mexico City on April 14, 2018 during the final concert of Friedman's world tour in support of "Wall Of Sound".