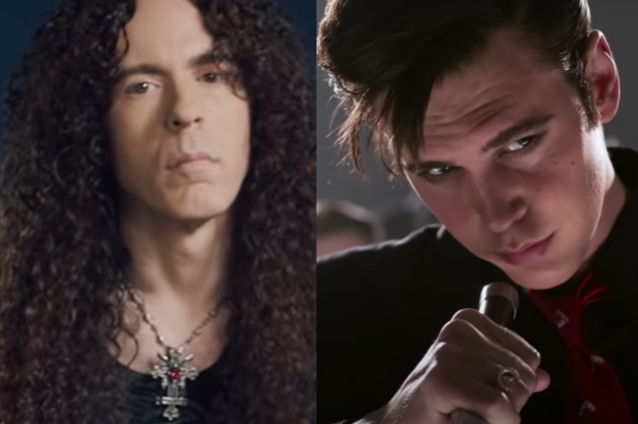 Marty Friedman has praised the new biopic of Elvis Presley, calling it "the be-all-end-all movie" about the iconic singer.

The 59-year-old former MEGADETH guitarist, who says he's been "an Elvis maniac" since the age of six, offered his opinion of Baz Luhrmann's biopic, in which Tom Hanks stars as the singer's manager, in a social media post on Friday (June 17).

He wrote: "Long 'ELVIS the movie' rant ahead…you have been severely warned…continue at your own risk

"Aside from family of course, the only constant that has continued through the vast majority of my life so far is Elvis. A lot of you wonderful folks in here know how much of a fan I am, but for those who don't. I'm a world class otaku when it comes to anything Elvis. I have over 1000 different vinyl records of his from all around the world, from remote countries on every continent except for Antarctica.

"Of course I have all of his movies and specials on DVD, read all the Elvis books from the fantastic to the moronic, and have seen every Elvis related bio, be it a movie, a documentary or TV series, several times. I brought some of my Elvis collection onto the Japanese TV version of 'Antiques Roadshow'. I'm not a religious guy, but the closest thing I have to a religious presence in my life is the way I feel towards Elvis which is completely different from all of my other favorite artists.

"So you get it, I'm a fan. So you might think I'm biased about this new Elvis movie.

"There have been many Elvis biopics and I enjoyed them all a lot. But nothing could have prepared me for this one, and how it utterly destroyed every one I had ever seen before. Don't get me wrong, the others were very well done and top class productions all the way. But this one is in such a different world that it obliterated its predecessors so violently, it's made me envision a stadium class band showing up at a high school battle of the bands contest to the shock of all witnessing it.

"My expectations were high because I heard Lisa Marie give it big praise and Tom Hanks has a solid record of being associated with hits. Still how many times do I need to see the same story I have seen countless times already? The filmmakers managed to tell the story we all know and love with so much fresh creativity, wonderful modern sense and from such a fresh angle that even a jaded Elvis maniac like myself felt like I was seeing everything for the very first time.

"In any movie (or any entertainment vehicle) there are thousands, if not millions of tiny choices to make in its production. It seemed that every choice in this movie was well thought out and executed with deep love and respect of Elvis' music and of Elvis the human. It was a huge treat to look forward to what was coming next in every scene.

"Elvis has suffered the most disgusting posthumous 'duet mashups' imaginable, not the least of which being the criminal pairing with Celine Dion. Most others have been almost as heinous, but some have been pretty good too. When I saw 'Viva Elvis' on stage in Las Vegas, the 'duet mashups' in that show were spine tingling and beautiful, created with love of Elvis as top priority rather than just showcasing the hits everyone knows. So in 'Elvis the Movie', when the opening sequence (!?) started with a jaw dropping and haunting reworking of a very deep cut from the barely known 'It Happened At The World's Fair' soundtrack, I knew this was no cash grab biopic. The opening sequence! Not 'Hound Dog', 'Jailhouse Rock' or 'All Shook Up', but they went with 'Cotton Candy Land', (!!) which was a throwaway song from a movie scene where Elvis sings it as a quick lullaby to a 6 year old girl. How they transformed this lame little ditty from 1963 into such a strong opening for a blockbuster film in 2022, was so incredible that I knew from that moment that I needed to strap myself in for what may come next. The entire 2 hours and 39 minutes of the film was at that same level of ingenuity and the storytelling aspect was so fresh and entertaining, that I didn't want it to end. I shed tears at several points in the film, not only because of the content of the story, but in many instances because of the absolutely exquisite performances and creative new ways to interpret the Elvis songs I have heard my whole life. This is coming from a guy who usually abhors anyone messing with Elvis music. The music in this movie and how it tells the story is out of this world. I'm pretty drained after watching it, actually. I rarely sit still for that long, but I was glued to every frame of this movie. My bony ass hurts.

"I'm so curious to what people will say about this movie, Elvis fans or not. Please let me know your thoughts in the comments. I hope I didn't spoil any of it for you, or get your hopes up too high. Maybe I just loved it because I'm an Elvis maniac since I was 6. Maybe a non-Elvis fan may think otherwise.

"Either way, I can't remember being this impressed by a movie, so if you are on the fence about seeing 'one more Elvis biopic', rest assured, you ain't seen nothing yet. Unless they make a new movie documenting the fact that he is actually still alive, this is, and will likely always be, the be all, end all movie about Elvis."

"Elvis" debuted at the Cannes Film Festival last month. The film chronicles Elvis's "rise to fame to his unprecedented stardom, against the backdrop of the evolving cultural landscape and the loss of innocence in America," according to Warner Bros.

During a press event earlier this year, Luhrmann said he was inspired to make a movie about Presley due to "musical icons in my life that were so important to me."

Aside from family of course,...