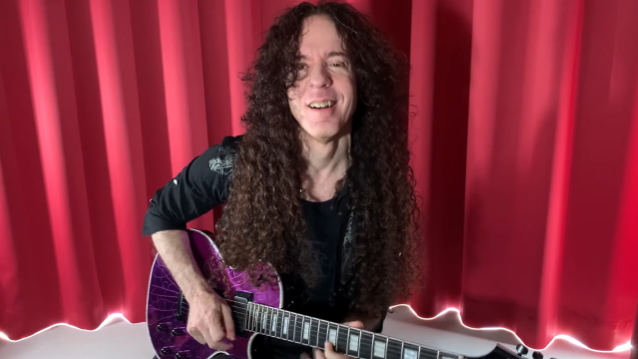 "It's just a gorgeous guitar," said Friedman. "The people at Jackson came up with a way to develop this — it's actually really a custom type of job but they managed to do it in such a way to put it out to the public at a reasonable price point."

The Pro Series Signature Marty Friedman MF-1 from Jackson channels the energy and flair of Friedman's impactful contributions to heavy metal guitar in bands like CACOPHANY and MEGADETH, as well as his own solo material. This 24.75"-scale signature model is loaded with great features to match the demanding needs of an elite and intricate player like Friedman, but at an affordable price.

Friedman's signature MF-1 features a resonant mahogany body, a striking cracked mirror top and a mahogany set-neck with a scarf joint and graphite-reinforcement rods for added stability. Equipped with Marty Friedman dual passive EMG MF signature humbucking pickups, two volume and two tone controls and a three-way pickup toggle, this axe gives you the power to wrangle all of the subtle nuances out of your guitar tone. With a stunning cracked Purple Mirror finish, complete with 3-ply white/abalone/white body binding, all-black hardware and reverse Jackson 3x3 (3 over, 3 under) AT-1 black headstock, you'll never need to worry about being upstaged.

Marty's latest solo album, Tokyo Jukebox 3", was released in October in Japan. According to Billboard, the LP features Marty's cover versions of a wide variety of pop songs, including such contemporary numbers as LiSA's "Gurenge" and OFFICIAL HIGE DANDISM's "Shukumei", along with DA PUMP's dance track "U.S.A.", END OF THE WORLD's ballad "Sazanka", and the vocaloid hit "Senbonzakura Feat. Hatsune Miku". Some throwback J-pop hits from the '90s are included on the set as well, such as ZARD's "Makenaide" and EVERY LITTLE THING's "Time Goes By".

As previously reported, Marty's long-awaited documentary, titled "Spacefox", will tentatively arrive later this year. The film, which is being directed by Jeremy Frindel, the founder of Substratum Films, follows Friedman's reinvention from lead guitarist in MEGADETH to one of the most famous TV personalities in Japan.

Last June, Friedman released a "Home Jams" version of his song "Self Pollution", which originally appeared on "Wall Of Sound". The new rendition of the song features Friedman, along with his longtime bandmates Kiyoshi (bass) and Jordan Ziff (guitar), plus Anup Sastry (drums). The split-screen video was filmed in Tokyo, Osaka, Phoenix and Baltimore, with each musician separated in his or her home.

Friedman's "One Bad M.F. Live!!" came out in October 2018. The album was recorded in Mexico City on April 14, 2018 during the final concert of Friedman's world tour in support of "Wall Of Sound".