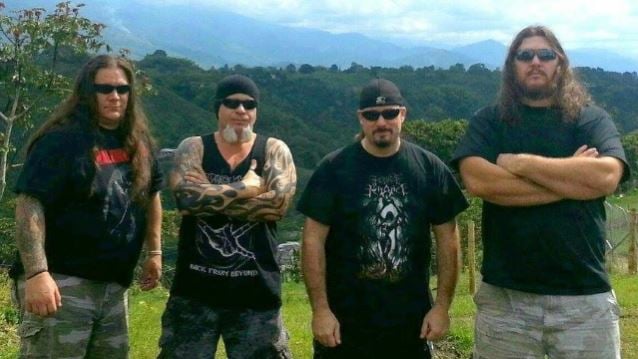 Bassist Terry Butler and vocalist Ed Webb have announced their departures from the Florida death metal band MASSACRE. As a result, MASSACRE has officially disbanded and will not take part in DEATH TO ALL's "Symbolic" 20th-anniversary European tour in February/March 2015. MASSACRE was also forced to cut short its participation in the "Swamp Leper Stomp '14" tour with DEATH TO ALL, OBITUARY and RIVERS OF NIHIL by one show.

Said Butler: "It's with a heavy heart that I am announcing my departure from MASSACRE. I wish Ed, [drummer] Mikey [Mazzonetto] and [guitarist] Rick [Rozz] the best of luck with their future endeavors.

"I would like to thank the awesome fans for their support and loyalty and to those who labored to help bring the band back from beyond. Thank you as well."

Added Webb: "After much thought and consideration, it is with deep regret that I announce my departure from MASSACRE. This was not an easy decision to make but a necessary one.

"The last four years have had its share of both unbelievable times as well as some times I wish to forget.

"I want to thank all of the MASSACRE fans, those who accepted me as the new vocalist as well as those who didn't. You guys gave me the desire to work harder than I ever had in the past. I also had the privilege to play some of the most incredible shows, do some killer tours and meet a lot of great people along the way.

"At this point, I am going to just concentrate on my two main projects [GENERICHRIST and DESTINED TO RUIN] as well as a few other projects I am working on.

"I want to endlessly thank Terry, Rick and Mikey for the opportunity to record an absolutely crushing CD and get to tour around the world with them. I wish them all the best in their future endeavors.

"I hope to see everyone in the future and thanks for letting me do what I live to do!"

MASSACRE's long-awaited comeback album, "Back From Beyond", was released on March 24 in Europe and April 1 in North America via Century Media Records. The CD was recorded and mixed by Tim Vazquez of CGM Studios in Altamonte Springs, Florida. The cover artwork was created by Toshihiro Egawa (CRYPTOPSY, KRISIUN, DEVOURMENT).