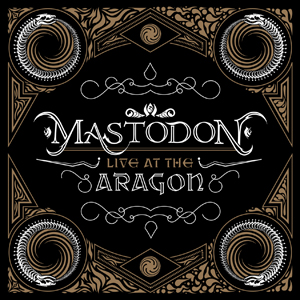 MASTODON: 'Crack The Skye' Performance Clip From 'Live At The Aragon' Available

Atlanta progressive metallers MASTODON will release their first-ever live experience package, entitled "Mastodon: Live At The Aragon", on March 15 via Reprise Records. The set will contain a CD and DVD which captures the band's sonic assault recorded and filmed live on October 19, 2009, at the Aragon Ballroom in Chicago while touring in support of its critically acclaimed album "Crack The Skye".

"Mastodon: Live At The Aragon" DVD + CD is comprised of "Crack The Skye" performed live in its glorious entirety along with fan favorites from "Blood Mountain" (2006) and "Leviathan" (2004) plus a brutal cover of "The Bit" by MELVINS. A dozen blistering tracks that loudly displays MASTODON's unmatched virtuosic prowess at the apex of their career to date. The DVD program contains a full 78-minute live visual concert experience filmed in Chicago and is a stunning representation of the band captured in their most natural and primal element. The DVD will also feature a 58-minute "tour film" entitled "Crack the Skye: The Movie", and contains the films which were projected on screen, behind the band in performance. These images were created specifically to illustrate the conceptual thread linking each of the songs on "Crack The Skye" and are exclusive to this package for the very first time giving the fans a brand new way to re-experience "Crack The Skye".

Fans can pre-order a special bundle through MastodonRocks.com that will include the complete "Mastodon: Live At The Aragon", along with a custom MASTODON guitar pick tin (with embossed picks) and a reproduction of the official MASTODON all-access tour laminate exclusive only to this package.

Fans who wish to purchase "Mastodon: Live At The Aragon" digital download can do so on the iTunes Store both in audio form, and as a live concert film, including "Crack The Skye: The Movie". In addition, the package will also be available through Amazon.com as an audio/video bundle.

In other news, MASTODON will help celebrate Record Store Day, April 16, by releasing two limited-edition vinyl pressings. First will be the version of "Mastodon: Live At The Aragon", pressed onto 180-gram-audiophile-weight vinyl and will also contain the DVD of the live show, plus "Crack the Skye: The Movie". Secondly, an exclusive split seven-inch vinyl single of the ZZ TOP classic "Just Got Paid", with MASTODON's version on one side backed with the original ZZ TOP version on the flip, housed in a clear plastic slipcase. MASTODON's version of the track originally appeared on the album "Covered, A Revolution In Sound", commemorating 50 years of Warner Bros. Records.

The "Crack The Skye" performance clip from "Mastodon: Live At The Aragon" can be viewed below (courtesy of Noisecreep.com).

A super-deluxe, super-limited-edition version of MASTODON's latest album, "Crack The Skye", was released on November 26, 2010 via Metal Club, a group of record stores throughout the U.S. and Canada that work to connect the vibrant metal community with their local record store. Only 600 of these sets were made. This version came housed in a hardbox case featuring a third-dimension wormhole design that contains exclusive and additional album art by long-time MASTODON artist Paul Romano. Inside is a full-length "Crack The Skye" CD plus a DVD on the "Making Of Crack The Skye" with photo gallery, track-by-track band commentary and more, by director Jimmy Hubbard.

MASTODON's six-song EP, "Jonah Hex", was released on June 29 via Reprise Records. The effort featured an original score by MASTODON and Oscar-nominated composer Mario Beltrami ("The Hurt Locker", "3:10 to Yuma"). MASTODON was asked to create the score personally by the film's director, Jimmy Hayward, who was inspired by repeated listenings of MASTODON's 2006 album, "Blood Mountain".

"Mastodon: Live At The Aragon" trailer: