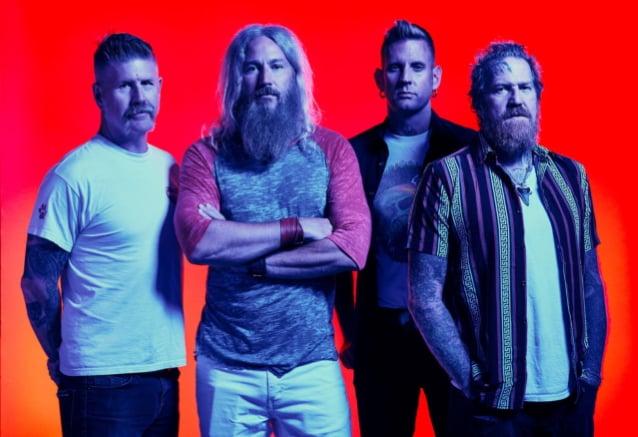 In a new interview with Banger TV's Sam Dunn, MASTODON drummer Brann Dailor spoke about the fact that he and his bandmates have managed to keep the same lineup since the group's inception more than two decades ago. He said (as transcribed by BLABBERMOUTH.NET): "At any time, anybody in MASTODON is free to go; there's no shackles, obviously. But I couldn't imagine it without one of the other guys. We're just such close friends. When we get together, we just like hanging out with each other. Yeah, we've had some trying times, but nothing… It feels very cliché [to say], but [we're like] brothers. If there's ever arguments or anything like that, it's dealt with like grownups do — we sit and talk about it. Or if there was something said late night, the next day it gets squashed. We say, 'Hey, do you really feel this way or was that the booze talking?" And usually it's hugs and it's fine."

Asked how he and his MASTODON bandmates maintain their friendship after so long, Brann said: "One thing that I think really helps, and this is a business thing, but it's publishing. We share equal publishing. And I think that that really helps. I've heard… I don't wanna name names, but there's some bands that famously didn't share publishing, and it really hurt them and it probably ended their careers. It's a shame, when you find out these stories about your favorite bands and they just couldn't make it work or get along, and it comes down to, unfortunately, a business decision. Where I feel like even if… Trying to look at it in the big picture and trying to imagine a lengthy career and say this album maybe somebody didn't contribute as much as someone else, but maybe on the next album they will contribute more. You don't know. But you try to just have the respect for your other players to say, 'I wrote this song but it's not gonna be a real MASTODON song unless Brent Hinds is playing a guitar solo on it or unless Troy Sanders is singing on it or Bill [Kelliher] adds his flavor of guitar riffage to something that I might have written. And so it's about respect and about respecting each other's artistry. And also we're just good friends and we crack each other up and we have 20-something years of inside jokes. I don't have any siblings, so those are my siblings. And even if MASTODON was to disband, I would never wanna see those relationships go away because I don't wanna lose the 20 years of reminiscing or the things that we've been through as a group. I've been all around the world a million times with those guys and had crazy experiences opening for all our favorite bands in the world. I mean, the stories are endless. So I don't want that to go away."

Last December, Kelliher spoke to the FM99 WNOR radio station about the fact that he and his bandmates decided from the beginning to split their songwriting credits equally between the four members of the group. He said: "In our band, when we first started, I remember when signing [a record deal]… We got a lawyer, and he wanted [to know], 'How do you wanna divvy all your publishing up?' And, 'Who writes what?' — music and stuff like that. And I thought about it long and hard, and I said everybody in the band has a job and everybody does something. It might not always be this person that writes every song, and I just think it'd be silly if it's, like, well, the guys that write the most get paid the most. 'Cause that's gonna be like a competition now in our band. So many bands break up over that. Bands that have one guy that does all the writing tend to kind of sound very similar on every song.

"I said, 'You know what? Just divvy everything up 25 percent [for each member],'" he revealed. "So, no matter what people do in the band… Everyone always has a job. And sometimes Troy doesn't write that many riffs, but he writes lyrics. Brann plays drums but he writes most of the lyrical content lately.

"I just didn't want it to be like a competition," Bill added. "And it's worked out well for us. Everybody writes and everybody contributes in their own ways. Back in the day, Troy drove the van 90 percent of the time. It's, like, well, how do you pay somebody more for that if they don't write the music and you have it in the contract where the guys that write the music get paid more. We're not that kind of band. We're a very fair and democratic kind of band. And that's what keeps us going."