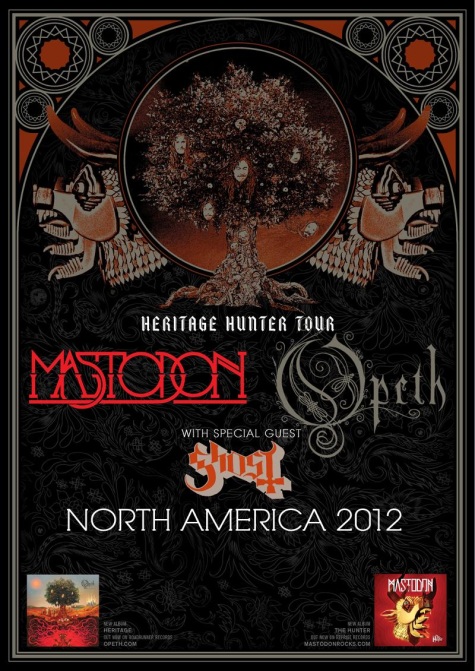 Grammy nominees MASTODON have announced that they will hit the road for a spring North American tour in support of their current album "The Hunter", which was released by Reprise Records in September. The tour kicks off on April 4 in Portland, Maine, and visits more than 30 cities in the U.S. and Canada before wrapping up with a hometown show at Atlanta's Masquerade Music Park on May 12. These shows will feature an amazing night of powerful music featuring a dream bill with Swedish metal band OPETH as co-headliners, with special guest GHOST providing support on all dates. Collectively MASTODON has stated: "We're excited to co-headline this tour with OPETH for whom we have great respect and admiration. Having GHOST along as well will make this tour a special event." Tickets go on sale February 3 and February 4. There will be a fan presale scheduled to begin at 3 p.m. local venue time on Wednesday, February 1 available only at MastodonRocks.com.

"Watershed" was the follow-up to the band's acclaimed "Ghost Reveries" CD, which debuted at No. 64 on the Billboard chart back in September 2005 with first-week sales of just under 15,000.