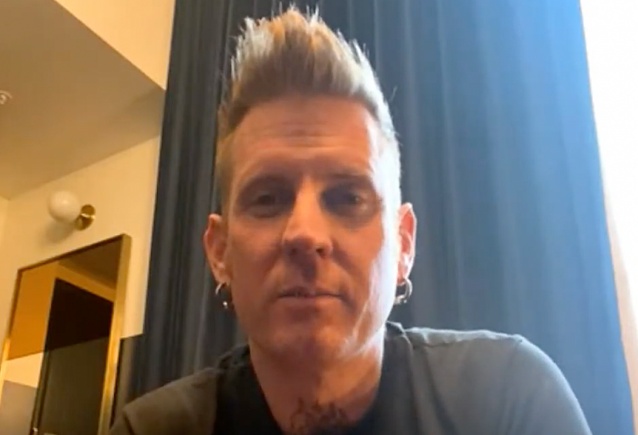 MASTODON drummer Brann Dailor has revealed that he contracted COVID-19, the disease caused by the SARS-CoV-2 coronavirus, immediately after the band's recently completed U.S. tour with OPETH. "Right when I got home from tour, I had COVID — like the day I got home," he told Art Of Rock in a new interview (as transcribed by BLABBERMOUTH.NET). "I tested positive. I got pretty sick, actually. I was sick for a couple of weeks. I was down and out. But I guess the good news of it was it didn't happen while we were on tour and it happened when I got home. So I was, like, 'Oh, I'm sick.' And I had the opportunity to be sick and I didn't have to get on stage and play and stuff, which I've done with the flu many times; it's one of the worst feelings ever, but you've gotta bring the music to the people. It doesn't matter how you feel — do it."

According to Dailor, he has played a number of shows in the past when he didn't feel a hundred percent healthy. "Many times I'd be laying backstage, on one of the couches backstage, just feeling like death, thinking to myself, 'I don't know how I'm gonna pull this off,' and then getting up there," he said. "I've had some of my best shows when I've been sick as a dog. So I don't know what happens there. But something else takes over. Maybe a couple of NyQuils [cough, cold and flu medicine] and you're feeling like you're out of your mind and you get up there and just play the drums and your body takes over. I don't recommend it."

Dailor went on to say that MASTODON is planning on returning to the road later this year. "We will announce something soon," he said. "We're just waiting for it to completely solidify and come all together. But, yeah, there'll be some dates coming up soon.

"It's a strange world, isn't it?" he continued. "It's been a strange time. Nothing's really stable right now, unfortunately. We kind of thought that, 'Okay, we're back. Everything's back, right?' But it's, like, hold your horses, I guess. But I think that things are moving in the right direction. We should have a nice, big announcement soon for another tour in the States."

This past November, MASTODON was announced as one of the "Best Metal Performance" nominees at the 64th annual Grammy Awards, which will be held on April 3, 2022, at the MGM Grand Garden Arena in Las Vegas. The progressive metallers were nominated for their song "Pushing The Tides", the first single from their latest album, "Hushed And Grim", which came out in October.