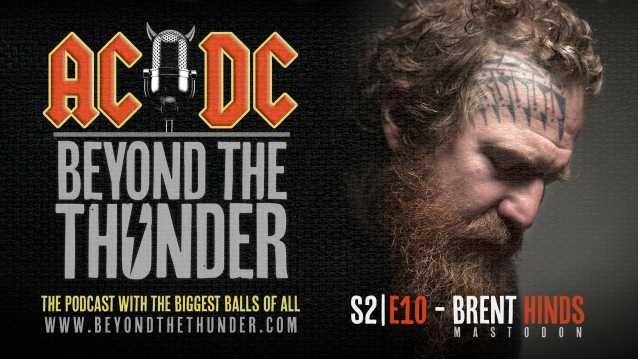 Brent Hinds, songwriter, vocalist and lead guitarist for the Grammy Award-winning band MASTODON, is the latest guest to pay homage to AC/DC on the season two finale of the "AC/DC Beyond The Thunder" podcast.

Hinds discusses his early banjo-playing days growing up in Birmingham, Alabama, eventually inspiring him to learn to play guitar thanks to one, Angus Young, after sneaking a cassette of AC/DC's "Highway To Hell" around his parent's strict Bible Belt household.

"You can't listen to AC/DC," scolded Brent's parents, "You'll go to hell!". Instead of conjuring up the devil, the music made Hinds feel "alive" and was "electrifying." "AC/DC's like a religion," confessed Hinds, calling them, "the quintessential rock 'n' roll band."

During this candid season two finale, Hinds invites listeners on a wild journey — from getting lucky during his first AC/DC concert in high school… with his teacher, sharing producer Brendan O'Brien in the studio, desperately trying to not end up like Bon Scott one day, and pissing in Angus Young's pocket?

"I was at this awards show. I just walked over to him and said, 'Thank you for your guitar playing because you really influenced me as a guitar player.'" As the MASTODON guitarist went on to tell Young that he wouldn't even be at the Golden Gods awards show without his influence, the AC/DC schoolboy-wearing founder pulled Hinds up short by saying, "Quit pissing in my pocket!", which Hinds would later learn to be an Australian back-handed compliment.

Hinds formed MASTODON in Atlanta, Georgia in 2000. Their track, "Blood & Thunder", was chosen as one of the most important recordings of the decade by National Public Radio. The band is currently in the studio working on new material.