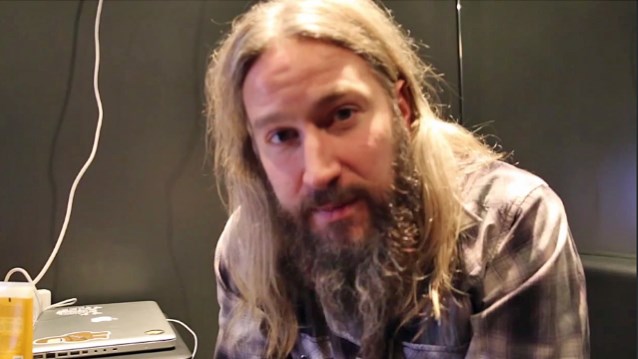 MASTODON's TROY SANDERS: 'We Just Write What We Love, And We Love What We Write'

Italy's SpazioRock.it recently conducted an interview with bassist and co-vocalist Troy Sanders of Atlanta progressive metallers MASTODON. You can now watch the chat below.

Asked about the fan response to MASTODON's latest album, "Once More 'Round The Sun", Sanders said: "We're very happy with the result of the new record, 'Once More 'Round The Sun'. The four of us in the band are very, very happy with it, and that's the most important thing. But it seems like a handful of people around the world seem to like it too, and that's wonderful."

He continued: "Every record that we do is gonna sound different, because we always want to evolve and create our own musical path. And every record will be different. We do not wanna write the same record twice. And it's a musical journey that the four of us are on. And to any fans that we've ever had before, we want them to embrace it and grow with us, but we don't expect people to. We just write what we love, and we love what we write. And that's the path that it takes."

Regarding the fact that there are more memorable choruses on "Once More 'Round The Sun" compared to some of MASTODON's previous albums, Sanders said: "We've tried to incorporate more melody — not only guitar-wise, but vocal melodies and vocal harmonies and vocal patterns that really are catchy; you know, like, hooks that bring you in and make a song more memorable. So we did spend more time and effort on trying to find those right vocal moments for this new record without cheating the song's music itself."

He continued: "You can find vocal patterns that are catchy and meaningful to the song without just being cheesy about it and singing for the sake of not screaming. We're always trying to be better songwriters, and just continue to evolve and make songs that don't sound like the last song we wrote."

"Once More 'Round The Sun", sold around 34,000 copies in the United States in its first week of release to land at position No. 6 on The Billboard 200 chart. The record arrived in stores on June 24, 2014 via Reprise Records.

"Once More 'Round The Sun" was recorded in Nashville with Grammy Award-winning producer Nick Raskulinecz, who is known for his work with RUSH, DEFTONES, FOO FIGHTERS and ALICE IN CHAINS.