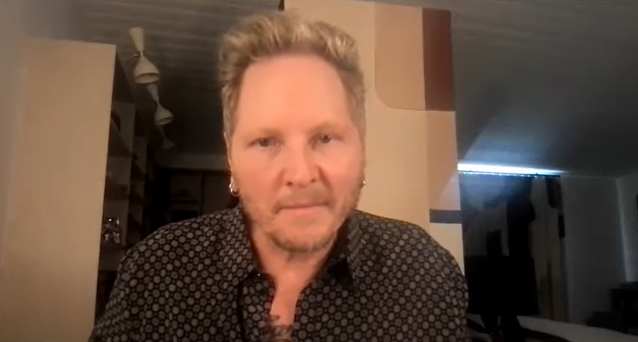 MATT SORUM Recalls Trying Out For DAVID LEE ROTH's Solo Band: 'It Was Probably The Craziest Audition I Ever Did'

In a new interview with Modern Drummer, former GUNS N' ROSES member Matt Sorum recalled auditioning for the drummer slot in David Lee Roth's solo band in 1985, a gig that eventually went to Greg Bissonette. He said (as transcribed by BLABBERMOUTH.NET): "Literally when I came out that door, there was Greg Bissonette and Mark Craney standing there. But no one knew [the audition] was for David Lee Roth. We all got called by Steve Vai. And we were, like, 'Steve Vai? It's that guy from [Frank] Zappa.' So when I walked in… It was very clinical. We were playing crazy time signatures. It was very Zappa school. He was running me through the mill. Like, 'Give me a 7/4. Play GENESIS's 'The Cinema Show'.' 'I got that. Okay.' And then he said something, like, 'Play 26 over 8.' And I was kind of cocky, and I looked up and I went, 'Why?' And then I saw Billy Sheehan sitting on the couch. I go, 'God, I'd love to jam. Can we jam?' We didn't jam. I played by myself. And it was probably the craziest audition I ever did. I never had a situation where I had to stand there and Steve Vai was reciting all these notes and running me through this whole school of... At that point in my life, I prided myself on being a pretty pure rock and roll guy. But I looked at Greg Bissonette, and I knew he had all those other elements of — he's schooled, at North Texas State [University], and then Craney, the same thing."

A couple of years ago, Bissonette told Rolling Stone that he landed the Roth gig after auditioning for a spot in the VINNIE VINCENT INVASION, unaware that Vincent had already decided on Bobby Rock. "Afterwards he said to me, 'I already have a drummer, but I really enjoyed jamming with you. You’d be great for Dave Roth,'" he recalled. "I go, 'Dave Roth? Isn't he in VAN HALEN?' He goes, 'Not anymore. He left VAN HALEN. He got Billy Sheehan from TALAS [on bass] and Steve Vai on guitar. They are looking for a drummer. I think you’d be great. Call Steve Vai.'"

Prior to Gregg securing the Roth job, David had been working with Vai's drummer, Chris Frazier, but abruptly decided to audition other drummers rather than giving Frazier the gig. After placing want ads in the local trade papers, Vai and Sheehan set up shop at Hollywood's S.I.R. Studios where "this huge line, just down the block" of musicians turned up to try out, according to Gregg.

"So I walk in the room, and it's Steve and Billy and this funky old drum set. I sat right down and they said, 'Hey, could you play a solo for us?'" he recalled to Guitar World. After Bissonette finished, Vai showed him a guitar part that would later appear Roth's 1988 album "Skyscraper". "This piece would end up being 'Hot Dog And A Shake'. Steve wanted me to hit these breaks with him and Billy, and during all that, he would solo. So as Steve was talking I reached into my backpack and took out a Sharpie. I'd brought my own snare, so I started writing out these figures on my snare head. Steve goes, 'Woah! So you can read and write music? This is amazing!'" A day later, Vai called him and told him he would have to play for Roth. That was followed by a third audition, in front of producer Ted Templeman.

After being delayed several times due to the coronavirus pandemic, Sorum's long-awaited autobiography, "Double Talkin' Jive: True Rock 'N' Roll Stories From The Drummer Of Guns N' Roses, The Cult, And Velvet Revolver", finally arrived on May 10 via Rare Bird Books.