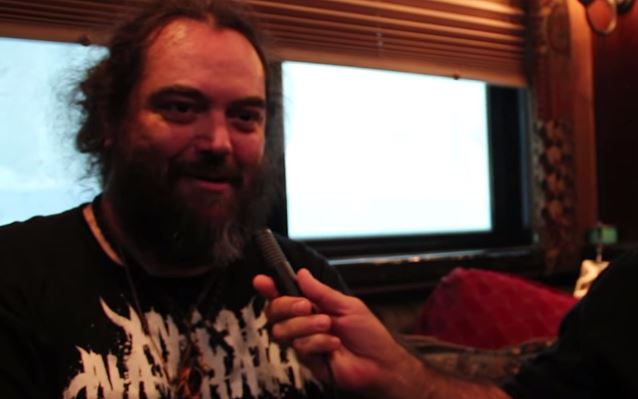 On September 30, Jimmy Cabbs recently conducted an interview with former SEPULTURA and current SOULFLY frontman Max Cavalera in Los Angeles, California. You can now watch the chat in two parts below.

Asked if he is worried that SOULFLY's new album, "Archangel", will be misunderstood because of its numerous biblical references, Cavalera said: "Being metal, we're always under scrutiny, and we're always being judged by society, so you kind of get used to that — the kind of feeling that you get at an airport sometimes. I'm sitting there and I see the looks of people, and you know what they're thinking, which is not always nice. And you always get searched for security… Random selection… right. [Laughs] It's always you.

"But I don't know… I think the work on 'Archangel' is very… I'm not a Christian band, we're not a Christian group, and we're not pushing or selling religion to anybody. In fact, a lot of my favorite bands are stuff like WATAIN and BEHEMOTH, and they're pretty much Satanic, and I wear their shirts all the time. So I don't really care for that.

"I just wanted to make something different and exciting, so I was reading the stories and they were really… Some of the Old Testament stories are so good for metal; it's perfect. They work really, really great. I even took phrases from the Old Testament in [the song] 'Sodomites'.

"I've done almost kind of everything. I did a political phase with 'Chaos A.D.' and tribal phase with 'Roots' and slavery with 'Enslaved'. And 'Dark Ages' is about the death of Dimebag [PANTERA] and that dark time.

"If I have a chance to do something new and exciting, why not? I go for it; I just jump right into it and try to do my best, but really have a mentality of non-preaching kind of style. I'm not preaching to anybody what they should be or what they should not be — that's not my business. I'm just making it into a song that I hope will be a kick-ass song, and that's all I want: a good song, a powerful song that people can embrace… sing along. [It's] one of my favorite things — working on the choruses — strong choruses. They're hard to come by — they don't come by all the time — but when it clicks, it clicks, and you get the whole crowd singing. Man, that's the best feeling in the world."

SOULFLY has tapped Mike Leon (HAVOK) to play bass on the band's current North American headlining tour, which kicked off in Los Angeles.

SOULFLY will embark on another U.S. tour with CROWBAR this November, following the Max Cavalera-fronted band's North American run with SOILWORK, DECAPITATED and SHATTERED SUN. Continuing with them on their campaign across the continent is SHATTERED SUN, along with the Phoenix, Arizona-based metal act INCITE.