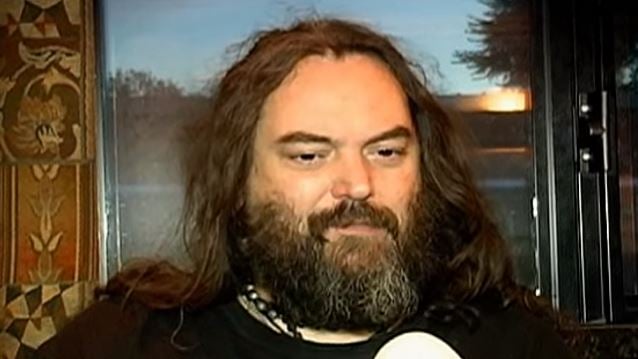 Robb Chavez of "Robb's Metalworks" conducted an interview with Max Cavalera (SOULFLY, SEPULTURA, CAVALERA CONSPIRACY, KILLER BE KILLED) on October 28 in Austin, Texas. You can now watch the chat below.

Speaking about why SOULFLY had made a gradual transition towards a more extreme sound on the band's recent albums, Max said: "I'm not sure. I'm really attracted to extreme metal. I like the power and the energy of it."

He continued: "SOULFLY is very interesting, because [2015's 'Archangel' is] our tenth album, so we had to do something different. So I thought… 'Archangel' had biblical themes that I never worked with before. The cover had the Archangel Michael. And it was really cool, man. We worked first time with Matt Hyde, a great producer, and then we had some really great guests like Todd [Jones] from NAILS on 'Sodomites' and Matt [Young] from KING PARROT on 'Live Life Hard!' And, yeah, it came out really cool. I love the record. I think Zyon's [Max Cavalera's son and SOULFLY drummer] doing really good; he's playing a lot better than he did on 'Savages'.

Max added: "As far as why it gets heavier, I can't… That's just me. I just love the heavy stuff. I can't get rid of it. All the stuff I touch ends up… CAVALERA [CONSPIRACY] got heavier. KILLER BE KILLED is the only exception — it's kind of more melodic — because it has the other guys that can sing on it. But as far as my stuff, I just love getting heavier and heavier. You know, I might do a record that goes back to the tribal stuff in the future; that's been on the back of my mind to do it. But, for now, I've been very happy with the records I've been releasing — kind of extreme metal coming out and making its presence felt. It feels really good."

SOULFLY will embark on a European headlining tour in early 2016 in support of "Archangel".

SOULFLY tapped Mike Leon (HAVOK) to play bass on the band's recent North American headlining tour. Leon said: "I've been a fan of Max and his music since I was a little kid, and to be playing with him and the guys now is truly unbelievable!"

Handling bass duties for SOULFLY during some of the band's shows earlier in the year was Max Cavalera's son Igor, who also sings for the Phoenix, Arizona band LODY KONG.