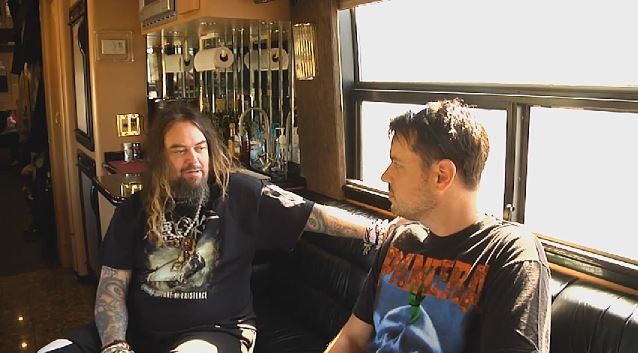 Jimmy Black of Music On 11 conducted an interview with Max Cavalera (SOULFLY, CAVALERA CONSPIRACY, KILLER BE KILLED, SEPULTURA) on August 12 at The Chameleon Room in Oklahoma City, Oklahoma. You can now watch the chat below.

CAVALERA CONSPIRACY, the band led by brothers and founding SEPULTURA members Max (also of SOULFLY) and Igor Cavalera, has set "Pandemonium" as the title of its third album, due on November 4 via Napalm Records. The CD was produced by John Gray, who has previously worked with SOULFLY.

Max's autobiography, "My Bloody Roots: From Sepultura To Soulfly And Beyond", was co-written by Max Cavalera and Joel McIver, author of 25 books on music. The foreword was written by Dave Grohl (FOO FIGHTERS, NIRVANA).

SOULFY's ninth album, "Savages", was released on October 1, 2013 via SOULFLY's new label home, Nuclear Blast Entertainment. The CD was produced by Terry Date, who is known for his work with such acts as PANTERA, DEFTONES and SOUNDGARDEN, among many others. Guest vocal appearances on "Savages" include SOULFLY bass player Tony Campos, CLUTCH's Neil Fallon, NAPALM DEATH's Mitch Harris, Jamie Hanks of I DECLARE WAR and SOULFLY mainman Max Cavalera's son Igor Cavalera (of LODY KONG).

The self-titled debut album from KILLER BE KILLED, the new band comprised of Max Cavalera, Greg Puciato (THE DILLINGER ESCAPE PLAN),Troy Sanders (MASTODON) and Dave Elitch (ex-THE MARS VOLTA),sold around 5,500 copies in the United States in its first week of release to debut at position No. 58 on The Billboard 200 chart.

"Killer Be Killed" was released on May 13 (one day earlier internationally) via Nuclear Blast Entertainment. The CD was produced and mixed by Josh Wilbur, whose credits include work with GOJIRA, LAMB OF GOD, HATEBREED, AVENGED SEVENFOLD, ESCAPE THE FATE, P!NK and STEVE EARLE. Cover art and packaging was executed by Ryan Clark of Invisible Creature Design, the Grammy-nominated design firm whose clients include ALICE IN CHAINS, FOO FIGHTERS, CHRIS CORNELL, DEVILDRIVER, MONSTER MAGNET, WOLFMOTHER and DEMON HUNTER.