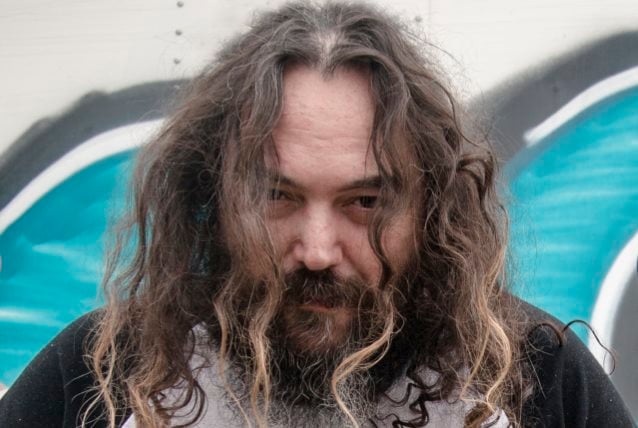 Metal Wani's Jessie David recently conducted an interview with SOULFLY frontman Max Cavalera about the band's "Point Blank With Soulfly" tour, where SOULFLY is performing NAILBOMB's lone studio album, 1994's "Point Blank", in full. "Point Blank" saw the then-SEPULTURA frontman team up with FUDGE TUNNEL's Alex Newport for a dense, industrialized offering that included a variety of samples and punk rock influences. You can listen to the entire chat below. A few excerpts follow (transcribed by BLABBERMOUTH.NET).

On why SOULFLY is performing "Point Blank" in its entirety:

Max: "Well, it came a little bit on the tail on the 'Roots' thing [where Max and his brother/CAVALERA CONSPIRACY bandmate Igor performed SEPULTURA's 1996 album 'Roots' in full]. We had so much fun doing 'Roots'. It was like pure magic. I always loved the NAILBOMB record. I always thought that record would be great to play live. So we decided to give it a go. There's not really much going on right now. The CAVALERA record is all finished. I have to work on a new SOULFLY, but it's not until next year, so we had this time off. Gloria [Cavalera, Max's wife and manager] actually had the idea to have SOULFLY perform NAILBOMB and the more I thought about it, the more excited I got. I thought if we converted the 'Point Blank' record into a band with the power of SOULFLY behind it, it would be awesome. It already sounds great how it is, but if you put a band behind it playing everything, it would be even more exciting, even more heavier, crazier, wilder. So, the idea just got rolling. We started working on it and got all the samplers, all the noises from the original master tapes. We have the original backdrop that was used at the [1995] Dynamo [festival] show, which is a KKK guy with a target in his face, which is perfect for right now. Yeah, we've just been practicing. It sounds amazing. I think people are really going to like it a lot. That record was made to play live. I didn't realize that until now that I'm playing it every day rehearsing it and having so much fun. I cannot wait to play the stuff live for the fans. I think the fans are going to go ape-shit for it."

On his memories of recording "Point Blank":

Max: "I was really not the one who thought of the project. I was really just messing around with Alex. Alex was in town; I was living in Phoenix. He was dating Gloria's daughter, Christina, or hanging out a lot. He would come over to my house and I would grab the guitar and come to him and say 'Show me how you play the [FUDGE TUNNEL] 'Hate Songs In E Minor' riffs.' He showed me the riffs and I would be really mesmerized. He would come to me and go 'How do you play the really cool SEPULTURA-chug riffs that I love?' I would show him that. So from that, it created this really cool musician relationship. Then one day we were messing around with the riffs, just playing our own stuff in a bedroom and Gloria came in the room and she's, like, 'I'm going to make a band for you guys. You guys are going to make a project. I'm going to get Roadrunner to sign it!' We're all, like, 'What are you talking about? This is nothing. We're just fucking around.' She goes 'Don't worry about it.' I have to give her credit. That was really her idea. We weren't really thinking about making a record. We were just fucking around. Again, she was right as rain. It was the best thing. She did get a really good offer from Roadrunner. We bought a sampler with a little bit of money we got. Alex got to be a wizard with the sampling. In a couple of days, he could do anything on the freaking thing. We're sampling everything, bashing on washing machines, driving a car at eighty miles-per-hour, then stepping on the brakes and recording the sound of the car screeching, like all kinds of madness, just crazy shit. We recorded a lot of live TV, that's how we got the 'Hate Is Reality' sample. It was from one of those Geraldo [Rivera] shows, like talk shows. [Laughs] It's such a good sample. 'Hate is reality. Don't you know God hates?' It's great. You can't get better than that. There was a time where you could sample from movies without all the bullshit you have now to clear all the fucking samples. At that time, we didn't have to clear shit. We used samples from 'Henry: Portrait Of A Serial Killer'. 'Salvador', another great movie that I really love. There's a little bit of 'Apocalypse Now'. Yeah, there's a bunch of stuff. Of course, all of our records. I had a collection of vinyl and what we did, we'll play the vinyl and Alex would sample stuff out of it. The intro for 'Wasting Away' is a mixture of SONIC YOUTH, MOTÖRHEAD. It changes so much when you put it into a sampler. We got it all from those records: CELTIC FROST, HELLHAMMER, KREATOR, and then Alex's stuff, he always liked MELVINS and BIG BLACK, BLACK FLAG. It was fun. It was two guys that really didn't give a shit, just wanted to make heavy music with a fuck-you attitude. That's what that record is all about."

On whether there will be a follow-up to "Point Blank":

Max: "I don't know. I think it's hard. Alex is pretty much into the whole studio thing. I have not really talked to him in a long time. Gloria is actually the one who is in contact with him. She got in contact with him and talked to him about this tour. He even got her to get us to buy the right sampler for us to use. He's been very helpful. But, he doesn't like touring. I think he's done with all that stuff, so I find it very hard that we're going to make another record. But that's why this tour is so cool because we get to play a record that a lot of people want to hear. Even though it's without him, the power of the songs are still there. So yeah, everything is good. It's really good between us, our relationship is great. He just doesn't want to be a part of it. I totally respect his wishes, but he totally gave Gloria his blessing for us to do it. We felt really good about it that we can do a really good job on it and really pay tribute to the record the way it should. I'm pretty much done with 'Roots'. We have only one tour in December for two weeks with OVERKILL in Europe. We're done with 'Roots' forever; we're probably never going to do it again. It came at the right time. We're going to do this NAILBOMB tour, we're really excited for it. Then, later on next year, we're going to work on a new SOULFLY record."

The thirty-one-date "Point Blank With Soulfly" trek began October 6 in San Diego, California and wraps up November 8 in Albuquerque, New Mexico. Support on the trek will come from CANNABIS CORPSE and HARMS WAY on select dates in addition to NOISEM and LODY KONG. 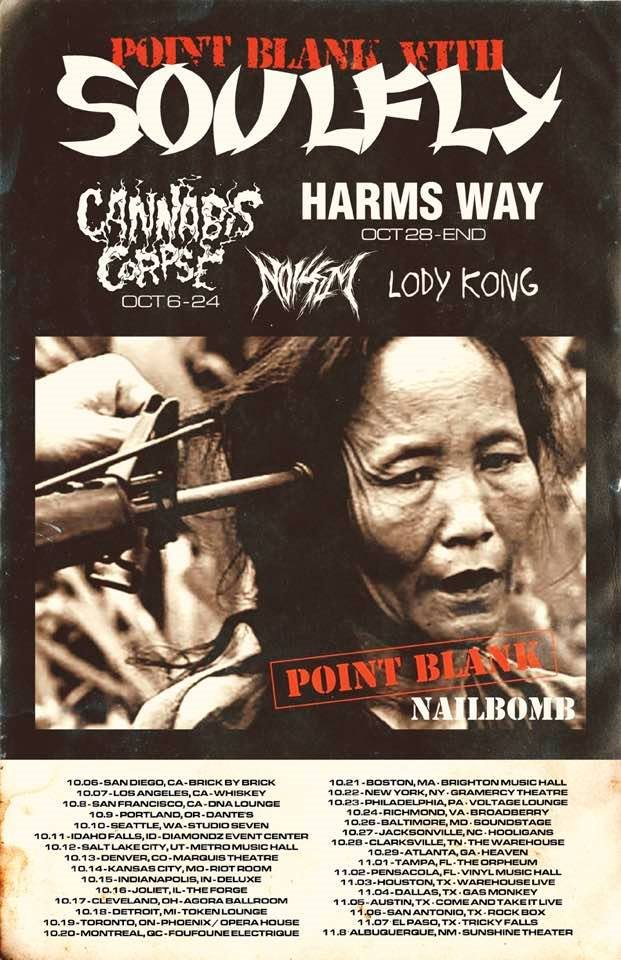