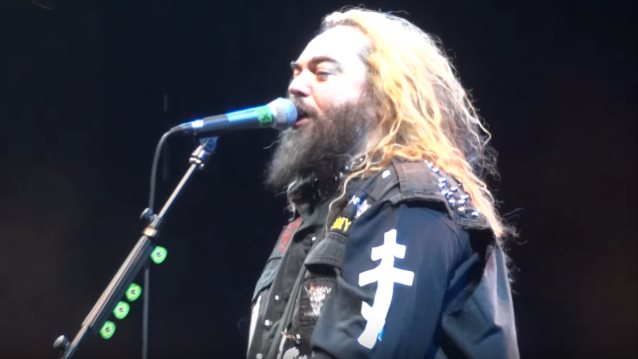 MAX CAVALERA On SEPULTURA: 'Tell Me One Great Song They Have Written Since I Left'

Former SEPULTURA member Max Cavalera (guitar, vocals) spoke to Metal Rules about the "Return To Roots" tour during which he and his brother Igor are celebrating the twentieth anniversary of the band's classic album "Roots" by performing the LP in its entirety. Asked if the tour was something that he and his brother had been planning for a long time, Max responded: "We haven't really planned this for a long time. We've been trying to do the reunion for a long time with the other jackasses. But they don't want to do it. They keep fucking it up, and at one time I called Andreas [Kisser, SEPULTURA guitarist]. I said, 'Let's fucking do it, man.' I got so frustrated. I was just going nowhere with it. Because I want to do it for the fans. So, thank God Gloria [Cavalera, Max's wife and manager] came up with this idea. She was saying, 'How about just you and Igor, just do it yourselves. It's your record, you wrote it. Igor played drums on it. You wrote all the music on it. You sang all the stuff. I think people will like to see it just like this. They don't care about the rest.'"

He continued: "I was a little bit apprehensive at first. I was, like, 'I don't know,' and so we did a test. We decided to try it first, so we did a festival in Canada. The show was fucking great. Everybody loved it. And next we did a whole U.S. tour, and it was fantastic. The European tour was all sold out. Like, all the shows were sold out. I don't remember having a full sold-out tour like this ever before; this was, like, the first time, So it was, like, this was a great idea."

Max added: "I think most what it works about is, I think a lot of people weren't around when 'Roots' came out, and they want to see it now — a lot of young kids, and a lot of people who were not able to see it back then. It's a bit different, because we play the whole record. So, it's not the 'Roots' tour of '96. Because the 'Roots' tour had all the songs, stuff from 'Beneath The Remains', 'Arise', 'Chaos A.D.' This is just the 'Roots' album first, for an hour and one minute. Then [what] we do with the next half an hour is what I call it our garage time. So, it's us just playing what we love. A couple of songs that we play, like CELTIC FROST's 'Procreation Of the Wicked', it was a B-side of 'Roots'. So, it fits with the 'Roots' theme.

Asked if he has gotten any feedback from the SEPULTURA camp about the "Return To Roots" tour and its success, Max said: "I'm sure they are not happy. But no, I haven't heard anything from them. But there's, like, one thing I have to say about those guys. Tell me one great song they have written since I left. Name one great album they have put out after that. I haven't seen anything. I don't know one name of one song as popular as 'Roots Bloody Roots'. So, it just tells me like whatever they are doing, I don't know how they keep on going. I don't think it's working at all. But somehow they keep on going, somehow. It's crazy to me. But we say, just fuck it. Because we got tired of asking them to do reunion and they never wanted to do it. So, I just said… Gloria had the idea. Just do these shows [with] Igor, and we're doing this. Fuck it. I don't give a shit what they say. We're going to do this, and it's great. We don't care what they think or say. They can talk shit if they want to."

He continued: "I saw some interview where Andreas was saying something like, ''Roots', it's a very difficult album to play.' No, it's not. I wrote 70 percent of it. It's not difficult to play at all. 'Schizophrenia' is difficult to play, full of different riffs."

Kisser told Australia's Loud that he wasn't bothered by the fact that Max and Igor were performing the entire "Roots" album on their tour. "I don't care," he said. "Everyone does whatever they want. If they feel that's good for their career, whatever, man. It doesn't change anything that I do. It's like a… It's weird to comment on something like that, because, for me, it's weird. [Laughs] I don't see the point. They have so many different projects. Actually, they left SEPULTURA for those projects, and now they're playing SEPULTURA. I don't understand that kind of attitude. But whatever, man. I respect any type of opinion, and, of course, I don't agree with them all, but people are free to do whatever they want. You just have to live with the consequences — that's all."