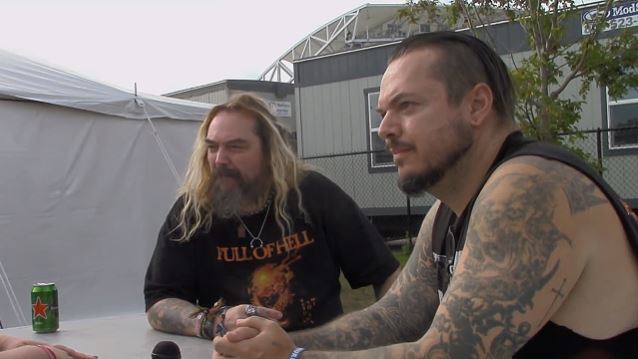 MAX CAVALERA: Playing SEPULTURA's 'Roots' Now Is 'Even Better Than When The Album Came Out'

Kristyn Clarke of PopCultureMadness.com conducted an interview with former SEPULTURA and current CAVALERA CONSPIRACY members Max (guitar, vocals) and Igor Cavalera (drums) at the Rock Allegiance festival, which was held September 17-18 in Chester, Pennsylvania. You can now watch the chat below. A couple of excerpts follow (transcribed by BLABBERMOUTH.NET).

On playing SEPULTURA's "Roots" album in its entirety as part of the recently launched "Return To Roots" tour:

On their personal connection to the songs on "Roots":

Igor: "It's cool because it's an album that through time, it showed there's a lot more than just fashion. It has shown that through the years that the songs are still relevant. For us, it's one of the important things. It's a record we would listen to at home. Twenty years later, you can still put the needle down and go, 'Yeah, sick!' It doesn't lose that feeling. To play those songs live, it's kind of like that. It's like, once we hit the stage, the energy [comes in] and I remember why we went crazy on that record."

Max: "We now see old fans coming back, almost tripping that we're doing this. And young fans who weren't even alive when 'Roots' came out are also rocking out with it, discovering, and seeing it for the first time because they weren't around. There's some people who were around and some who weren't around — they all mix together. We see both of them on the tour, which is really cool. It's good for everybody. I really think it's quite a special record. We tried a lot of different things. Like Igor said, the album has survived the test of time. It sounds as good now as it did 20 years ago, even better because a song like 'Roots Bloody Roots' is a classic in the metal world. There's a lot of feelings and flashbacks, and at the same time, we're doing it right now. Sometimes in your career you have to go back and revisit your old stuff, and to be able to do it like this is very special."

On weathering the changes in the music industry:

Max: "It's a whole different world from when we started. There were demo tapes, and tape trading, and letters. I still go to record stores and buy CDs; I never lost that side of me. I'm glad there's some record stores still open."

Igor: "People who complain about music being shitty nowadays are lazy. It's a different format, but a lot of kids are doing exactly what we did with the fanzines and going to a record store, looking around at the covers. They might be doing it online and you will find good stuff nowadays. It's really important now that there is a new generation of underground music coming up with crazy stuff. Whoever is complaining is because they don't want to search. They go on their computer and they're not doing the right search."

Max: "I find a lot of bands on Spotify and Bandcamp. I love Bandcamp. I think it's cool how metal today is coming from very different parts of the world, like the Middle East, Indonesia, Tasmania. Who would have thought Tasmania? PSYCROPTIC is crazy."