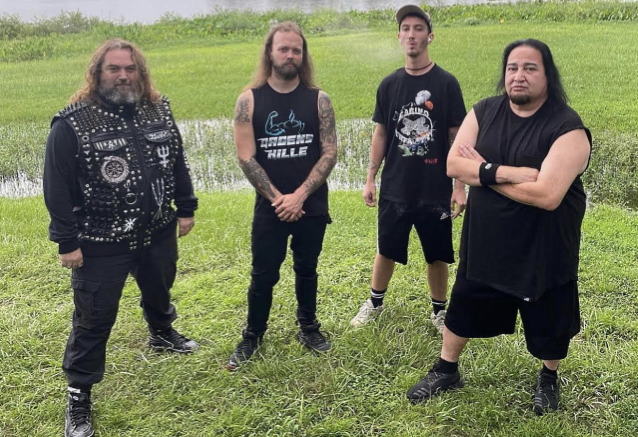 MAX CAVALERA: DINO CAZARES Touring With SOULFLY Is A 'Dream Come True For All The Fans'

Max and Dino discussed their expectations for the tour in a four-minute video that was filmed during the pre-tour rehearsals in Phoenix, Arizona and has just been uploaded to the SOULFLY YouTube channel. Max said (as transcribed by BLABBERMOUTH.NET): "What I'm looking most [forward to on] this tour with Dino, apart from everything that we've been through, I think it's a celebration of our passion for metal, and our roads meet up again, this time in the form of a tour. And I think it's really cool because we have a lot of the similar fans — a lot of FEAR FACTORY fans are SOULFLY fans; they like both bands anyway. So it's almost like it's gonna be a little bit of a dream come true for all these fans to see the both of us on a stage jamming [and] ripping. And for me, as a Dino fan, before he even got here [to our rehearsal space], I was trying to imagine how sick the songs are gonna sound with that crunchy Dino sound on some of the stuff that has never really sounded this aggressive — just like machine-tight riffing, just make the songs tighter. And he learned everything like the records, which is amazing. So we're playing stuff like 'Fire', 'Bleed' and 'Boom' the way it's on the record, which we never did before. And apart from that, [I'm] also just looking forward to having him on the road and telling stories and joking around, 'cause we do that. It's professional — we love being professional — but you've also gotta enjoy what you do; you've gotta have fun with it. And the whole crew tried to really welcome Dino into the SOULFLY camp. I think it's really cool. He told me even the SOULFLY tribe, all the fans embraced him into our camp, into our tribe. And to me, it's gonna be a unique opportunity. 'Cause he's in FEAR FACTORY, so, of course, he's not joining SOULFLY. But I really think this is a special thing we're doing. And who knows what's gonna come out of this? But it's gonna be amazing. The shows are gonna be amazing. And I'm very, very much looking forward to showcasing everything we've been working [on] here. It's gonna be just a very, very special SOULFLY tour — [more] different than any other tour we've ever had."

Added Dino: "What I'm really most excited about is all of it. From our history that we've had since the first time I met him. Actually, playing these songs and hanging out with him, all these memories are going through my mind. Being alongside, next to my brother and playing these riffs, it's gonna be killer. I can't wait for that. 'Cause a lot of times, over the years, he's invited me on stage to play a song or two — usually 'Eye For An Eye' — but now I'm gonna be able to do a whole set with him, which is really killer. I can't wait to see the smiles on kids' faces, to see me and him jamming together. And I'm really, really thankful that they've welcomed me into their family. I say that now, but I've always been a part of the family. But just being here and being in Arizona and rehearsing with everybody and just how warm everybody is and how they all take care of each other and we all take care of each other as well, and it's just really good to be here. And I can't wait to get out there and for those kids to see our styles collide. It's gonna be killer."