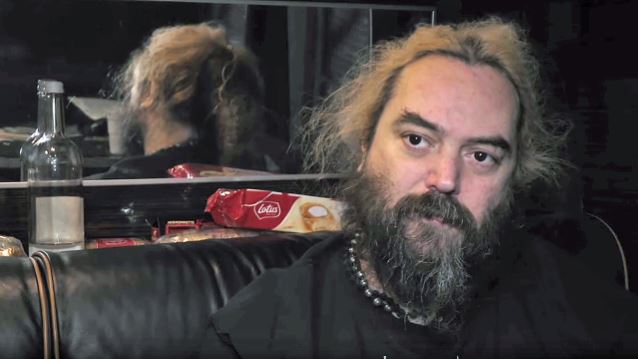 MAX CAVALERA: 'Return To Roots' Tour Is 'As Close As You're Gonna Get To The Original'

Max Cavalera (SEPULTURA, SOULFLY, CAVALERA CONSPIRACY, KILLER BE KILLED) was interviewed on a recent edition of the "Talk Toomey" podcast. You can now listen to the chat using the widget below. A couple of excerpts follow (transcribed by BLABBERMOUTH.NET).

On whether the upcoming "Return To Roots" North American tour with his brother Igor Cavalera (drums) — during which they will celebrate the twentieth anniversary of SEPULTURA's classic album "Roots" by performing the LP in its entirety — is a way to put an end to persistent "classic" SEPULTURA reunion rumors:

Max: "Yeah, I think this is our way of doing that, our way of dealing with it. 'Cause we could easily take it back and call it 'SEPULTURA,' but I don't think that… I don't know… I don't feel that would be the right way to do it, so I think by doing it this way with Igor and calling it 'Return To Roots' is, I think, as close as you're gonna get [to] the original. And I still get to do the other things that I love, like SOULFLY, KILLER BE KILLED and CAVALERA CONSPIRACY, which are all on board for me for the future. Especially next year, it's twenty years of SOULFLY, so it's a big date, a special date for me, and I'd love to do more stuff with that. And I think there's some stuff that was even destiny, I think, especially like we found images from the original album cover, from 'Roots'. The original design has two Indians instead of one, and that's what we are using for the promotion of this 'Return To Roots' tour. And it's really freaky to me to think that the original design had two Indians — almost like a sign, kind of freaky, like it was meant to be that we do this thing twenty years later. It's kind of crazy to think like that, but I'm really, really pumped about it; I think it's gonna be great. I think it's gonna be great for the people that saw us and the whole generation that never saw us; they have a chance to see this thing now and get a little taste of the songs and the vibe of how we are playing live. And I think it's gonna be great; I'm really excited."

On his connection with SOULFLY and CAVALERA CONSPIRACY guitarist Marc Rizzo:

Max: "Marc is great. He's one of the few guys that can play [the SEPULTURA] shit note by note, which is very difficult. No matter what period — he can play the early SEPULTURA, he can play the later SEPULTURA, he can play it all, and better. He adds his own style on it, which makes it even greater. He's a great guitar player, man — a great guy and a great guitar player — and I really love him as a partner. When I [first] partnered with him, I wanted it to go for a long time, because the one thing that was always missing in SOULFLY was a great guitar player. We had average guitar players, like Mikey [Doling] and Logan [Mader], but we never had a great, amazing… And when Marc came, I was, like, 'This guy is fucking amazing!' I can just sit in a dressing room and listen to him playing flamenco and never get bored; he just blows my mind. So he was kind of like the obvious choice to play this stuff. I don't even know anybody else that can actually play all this stuff down to every note like he does. So it's great having him around and having him in all these projects. He's kind of a soldier — he really soldiers through no matter what. He's been through the worst situations with us and the best situations that we can always count on him, which is great."