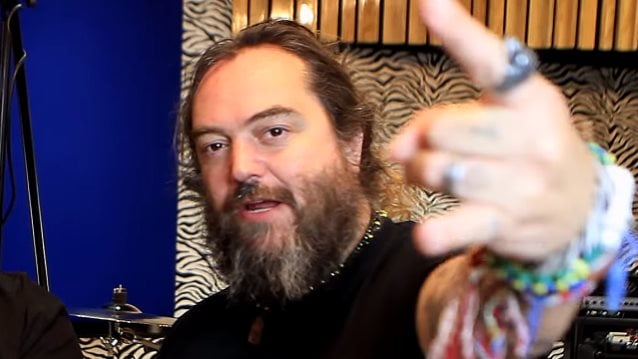 Max Cavalera (SOULFLY, CAVALERA CONSPIRACY, SEPULTURA) was interviewed on a recent edition of "The Classic Metal Show", which is heard live on Saturdays from 9 p.m. to 3 a.m. EST at TheClassicMetalShow.com. You can now listen to the chat in the YouTube clip below. A couple of excerpts follow (transcribed by BLABBERMOUTH.NET).

On his musical evolution over the years:

Max: "What I think is cool is that throughout the years, I got to really stretch my music quite a lot. So you've got stuff like KILLER BE KILLED, which was more melodic, and you've got the tribal stuff from the beginning of SOULFLY, which a lot of people really like the first record a lot. And then there is this return to heaviness, which is kind of like where I am right now. Because I've been listening to a lot heavier stuff — like NAILS and FULL OF HELL and all this great metal that's out right now. I think because of that, it kind of drew me back to heavier, more extreme kind of stuff. And I am cool with that. I like all the phases, man. I even like the early, early stuff, like [SEPULTURA's] 'Bestial Devastation' and 'Morbid Visions' — the black metal shit; it was cool. All that's good, man. It's all metal. At the end of the day, they're different variations of metal, but they're all connected by the thread of metal, and I think that's what it's all about. But right now I'm in a heavier phase, which, I think, is cool. SOULFLY's new album is heavy as hell too, so it's gonna continue all the heaviness."

On how different SOULFLY's upcoming album is from 2015's "Archangel":

Max: "'Archangel' was kind of a one-off. It was really biblical, and I'm not doing that much biblical stuff on this new SOULFLY. It's kind of more political and a little bit more reality-based. It has some spiritual stuff on it too. Sonically, it's a 'tribal thrash' kind of record, which I think is cool. 'Cause it's got the elements of the early SOULFLY — there's a lot of tribal, groove songs with percussion — but there's a lot of fast death metal, thrash metal stuff that you heard on [CAVALERA CONSPIRACY's 2017 album] 'Psychosis'. I kind of just blend both together. Because I think my works were kind of divided — you had the early SOULFLY, which was really tribal but it's really just kind of tribal, and you had 'Psychosis' and 'Dark Ages' [SOULFLY's 2005 album], which were more thrash and death metal. But I decided to put both together in one and see what happens. The new SOULFLY, I've kind of been calling it 'tribal thrash,' which I think is pretty exciting. I think it's going in the right direction, man. It was produced by Josh Wilbur, who did KILLER BE KILLED. He's big fan and he's a great producer — he's done some amazing records, like LAMB OF GOD and GOJIRA and HATEBREED and TRIVIUM. So he's a killer producer, and we had a great studio. I've gotta tell you: [SOULFLY guitarist] Marc Rizzo is really coming out on this one; his solos are insane, [and there are] a lot of weird noises he's making throughout the whole record, And my son Zyon [Cavalera, SOULFLY drummer] really came out of the shell on this one too. Sometimes Zyon reminds me of early [Dave] Lombardo stuff mixed with BAD BRAINS even, 'cause he listens to a lot of BAD BRAINS. So there's a lot of super energy kind of drumming and chaotic drumming, so I think it's really cool. I'm really, really excited for the record. We even have one song that's kind of off the wall — it sounds like MOTÖRHEAD, a bit like 'Ace Of Spades', and it's about touring and life on the road. It's called 'Feedback', like the feedback from the guitar. And that one's gonna be great live, because it's got a really catchy chorus and it's got that punk-metal, MOTÖRHEAD-meets-DISCHARGE vibe. So we've got stuff like that on the record that's gonna be really cool."

SOULFLY's new album tentatively due this summer via Nuclear Blast.

Max has just embarked on the Canadian leg of the "Point Blank With Soulfly" tour, where SOULFLY is performing NAILBOMB's lone studio album, 1994's "Point Blank", in full.