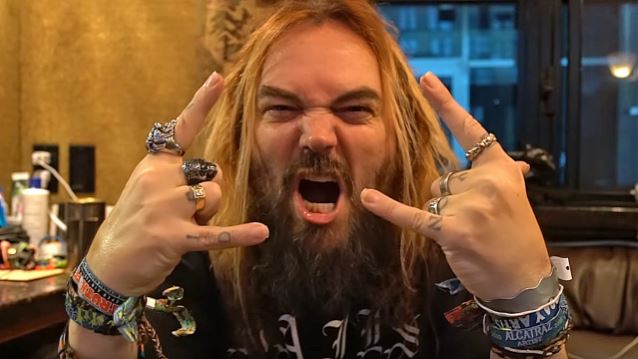 Max Cavalera will perform NAILBOMB's entire "Point Blank" album on tour with his SOULFLY bandmates. "Fuck yeah, NAILBOMB 'Point Blank' … one of my favorite records of all time," he says in a video message announcing the tour (see below). "I'll be playing the whole album for you guys."

Exact cities and dates for the trek have not yet been announced.

The sonic love child of Max and FUDGE TUNNEL's Alex Newport, this 1994 one-off album from their NAILBOMB union showcased dense, industrialized heaviness, seething with all-out punk aggression. In 13 tracks, the revered duo — crediting SEPULTURA alumns Andreas Kisser and Igor Cavalera, as well as FEAR FACTORY's Dino Cazares as players on the final product — managed to make an angry masterpiece that meets in the middle of what both SEPULTURA and FUDGE TUNNEL were doing at the time. But as for the visual representation of "Point Blank", the war-time photo of a Viet Cong woman with a gun to her head proves just as striking as the devastatingly heavy music within its sleeve.

Max told TeamRock last year about "Point Blank": "It's just such a pissed-off album! Me and Alex were pissed at everything and decided to make a real fuck-the-world 'hate project.' It is one of the most 'fuck-you' albums of all time; it aims at everything, and destroys everything. So, that'd be cool — to be remembered as a person who came here to fuck shit up, NAILBOMB's perfect!"

Did someone say NAILBOMB? Max has something up his sleeve for all the rooted fans of his music, and after years of this single request???? We are finally proud to bring it to you.....

Check this video for more info!