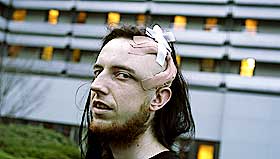 The Norwegian newspaper Dagbladet has published a photo of the aftermath of MAYHEM's sheep's head-throwing incident, which resulted in the fractured skull of 25-year-old Per Kristian Hagen, a member of the audience at the group's March 6 gig in Bergen (about 302 miles west of the Norwegian capital, Oslo).

Hagen, a MAYHEM fan, told local newspaper Bergensavisen that he is planning to file a claim for lost income in addition to having filed involuntary assault and battery charges against the band.

"If it turns out I've got permanent injuries after this, it's important to have some sort of record to refer to," Hagen said. "I'll have to file a claim for lost income, since I can't work for awhile."

The band usually are said to dismember pigs, but two weeks ago opted for a sheep. "I was standing near the mixing board and talking with a friend," Hagen recalled. "Suddenly I was hit in the head and knocked out. I don't remember seeing the sheep's head flying at me. I just remember I woke up on the floor."

Hagen ended up at Haukeland Hospital in Bergen, where doctors diagnosed a fractured skull near the temple. He underwent surgery the next day (March 7).

Hagen said he hasn't heard anything from the band, "but maybe they weren't aware of what happened." He still likes their music and now hopes to recover before venturing out again.

Hagen is irritated over one thing, though: Doctors had to shave off half of his long dark hair before they could patch him up. "Now I'll probably have to shave the rest of it off, too," he groaned.