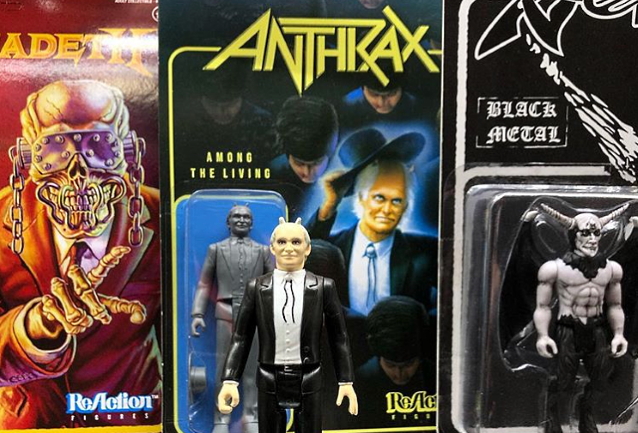 Super7 showed off prototypes and production samples for upcoming heavy metal ReAction figures for the first time at this year's Toy Fair in New York. The prototypes include MEGADETH's mascot Vic Rattlehead, the demon from the cover of VENOM's "Black Metal" album, and the person who is featured on the cover of ANTHRAX's "Among The Living".

When the SLAYER "Show No Mercy" ReAction figure was first released in February 2019, Flynn described his personal connection to the band, saying: "Growing up in the '80s, punk rock, skateboarding and metal were heavily intertwined. I learned about SLAYER first from their ads and reviews in Thrasher magazine. Needless to say, as teenage kids we were hooked on all things extreme, and SLAYER took it to the next level. Still to this day, SLAYER is on heavy rotation both personally and at the office, and 14-year old me could not be happier than to make a figure out of the artwork I drew onto folders, notebook covers, and blue lined paper for years."