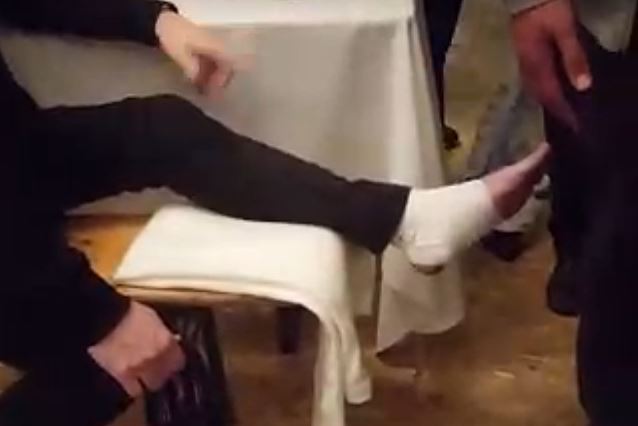 MEGADETH mainman Dave Mustaine broke the news via Periscope, telling fans that Ellefson "was walking across the ground [backstage before the show] and fell."

The Rockmaraton organizers immediately called an ambulance and Ellefson was transported to the Saint Pantaleon hospital in Dunaújváros, where his foot was placed in a cast. According to the organizers, Ellefson was in a good mood despite his injury and was taking selfies with the paramedics on his way back to the venue, still apparently believing that he would be able to play the show. Mustaine also seemed sure that the gig would happen, but apparently changed his mind shortly before MEGADETH was due to kick off the concert. The MEGADETH leader eventually went up on stage and announced the band's cancelation to disappointed fans.

Ellefson's injury is not expected to affect any of the remaining dates on MEGADETH's European tour, which resumes tomorrow (Saturday, July 16) at the Harley Days festival in Slovakia.

The MEGADETH bassist told Bandsintown earlier this year that he goes to the gym regularly and leads a "healthy lifestyle" while on tour.