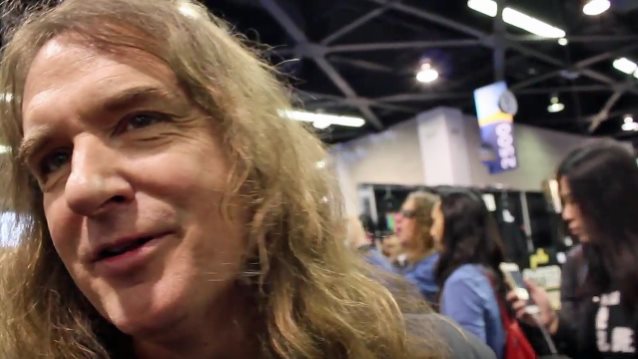 MEGADETH's DAVID ELLEFSON: 'It Would Be Great' To Finally Win A GRAMMY

Thrash metal pioneers MEGADETH have been nominated for a 2017 Grammy Award for "Best Metal Performance" for the title track of their latest album, "Dystopia". This marks the band's 12th Grammy nomination in this category (including nominations in the discontinued "Best Hard Rock/Metal Performance" category). The band is hoping to win its first Grammy at the 59th annual event, which will be held on February 12 at Staples Center in Los Angeles and broadcast on CBS at 8 p.m. ET.

Asked by The Age Of Metal at last month's NAMM show in Anaheim, California if it is surprising that MEGADETH hasn't won a Grammy already, the band's bassist, David Ellefson, said (see video below): "Listen, obviously, it would be great to win one. But just to even be nominated and recognized by our peers in the business and by the Grammy committee is huge. Because there's a lot of groups out there, and to be also be recognized and to be invited in, that's amazing. I mean, to me, that's ninety percent of it."

MEGADETH mainman Dave Mustaine released a statement in December in which he expressed his gratitude for the band's latest Grammy nomination. He said: "Last time we were nominated, I was at the awards talking with Kenny G and I said how we'd been nominated a lot, but hadn't won it yet. He said, 'Don't feel bad. It took me 21 times to win my first one!'

"This has been such an incredible year for MEGADETH. With so many milestones, and so many individual and group awards, to now have this honor of being nominated again is the grand finale to the most perfect campaign.

"We are very appreciative and thankful to all of our peers and contemporaries that are voting for the 2017 Grammys."

The band is continuing to tour in support of "Dystopia", which came out in January 2016.