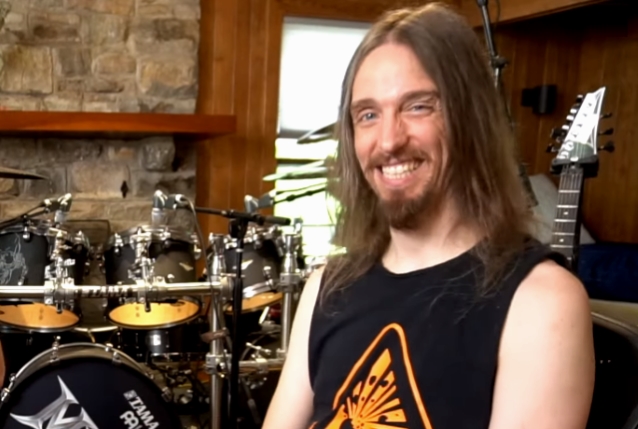 MEGADETH guitarist Kiko Loureiro has uploaded a new video in which he gets personal with the band's drummer, Dirk Verbeuren. In the 25-minute clip below, Kiko and Dirk talk about the 44-year-old Belgian-born-and-now-Los-Angeles-based drummer's perpetual smile and laughter, his uncomplicated approach to life and his seemingly inexhaustible love of family and friends.

Asked how he manages to maintain a positive attitude in a business where things almost constantly fail to go according to plan, Dirk said: "I'm not a religious person even though I grew up with Catholic — my parents were practicing Catholics. But then, at some point, when I was maybe 12 or 13, it kind of faded away, and it wasn't really for me that much to follow through. But I think how you approach life and choosing to be happy, for me, it's kind of a… maybe a philosophy, you can call it. Which, to me, that's kind of how I see religion — at the base of it, it's kind of like a philosophy of how you approach life. I'm not gonna say this is my religion, but it's kind of, like, if you understand that things will happen to you, so it's not about trying to avoid things to happen, like, let's say, a crappy morning, or a shitty show, or in our case, we could have a bad show onstage where the sound isn't good or there's technical issues — stuff will happen; no matter if you're at the top of everything, you're still gonna have problems. So it's about how you react, it's about how you decide to take these things and deal with them. And at some point, when I was thinking about that and reading and talking with people about that, I decided that it's really completely up to me. You can say, 'Oh, yeah, I'm upset because this person said this or because that happened.' You can, and sometimes we do, and sometimes I do, and we all do, so this is normal — it's not about that never happens. It will. But most of the time, when you can, you try to be in control of your reactions… Not necessarily in control. You made the choice, you made a conscious decision to be, like, 'I'm not gonna let this ruin my time. I'm not gonna let this ruin my day.' Because every problem usually has a solution, and sometimes the solution is right there; sometimes it happens later. So it's about patience, it's about just having an awareness."

He continued: "For me, when I was younger, I used to not be like this at all… I always kind of had a happy side, but there was also a part of me where I could wake up in the morning with a crappy mood and then my whole day was ruined from there. And I felt like I couldn't control it. It's a cycle — you get more angry because you're angry, and you feel worse because you feel bad. And then the whole day is ruined. At some point — I think maybe it happens when you get older a little bit, and you realize that… When you're 20, you don't think about death or [that] life is gonna come to an end. You believe that, like we all do — you don't even think. You just do, do do, and life is great, and then, at some point, you start realizing that, hey, this is gonna end one day. In my case, I had my mom pass away a few years ago, and she was sick a few years before that, and so going through that whole process really made me realize that life is finite."

Verbeuren had been playing with SOILWORK for more than a decade before being recommended for the MEGADETH gig in 2016 by LAMB OF GOD's Chris Adler, who called Dirk "probably [one of the] top three drummers in the world."

In interview with the KATT Rock 100.5 FM radio station, MEGADETH mainman Dave Mustaine described Dirk as "is one of the most pleasant, easy-to-get-along-with guys I've ever met in my life. I'll walk up to him and he'll smile and lean forward and pat me on the back. He goes [adopts thin accent], 'How's it going, buddy?' I could say, 'Oh, man…'… anything. 'Oh, okay, buddy.' [He] smiles and pats me, 'cause he's just a happy guy. I've never, ever, ever seen him not smile."