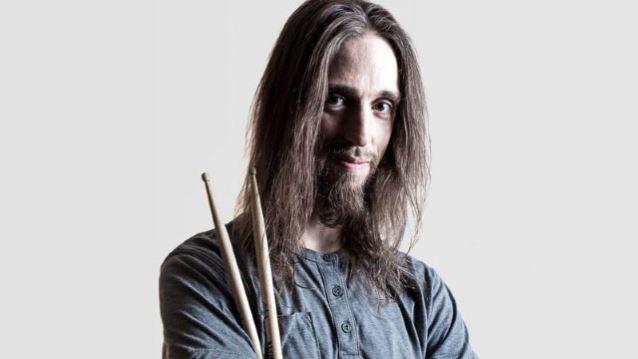 MEGADETH has announced the addition of Dirk Verbeuren as the band's new drummer. Verbeuren, formerly of Swedish metal band SOILWORK, has been performing with the band for months; his first show was Rock On The Range festival in May, to a crowd of 40,000 concertgoers.

Most recently, LAMB OF GOD drummer Chris Adler had performed all the drums on the band's latest album, "Dystopia", and had toured with MEGADETH when not otherwise busy with his band.

Said MEGADETH bandleader Dave Mustaine: "Chris Adler's contributions are sure to be felt for years to come. MEGADETH has been revitalized by Chris's playing, as well as his excellent suggestion of Dirk Verbeuren to drum with us. Tremendous thanks to Chris, and a big welcome to Dirk."

Verbeuren, the 40-year-old Belgian-born-and-now-Los-Angeles-based drummer who had been playing with SOILWORK for more than a decade, had this to say: "Dave, David [Ellefson, bass] and Kiko [Loureiro, guitar], I'm thankful for your warm welcome and thrilled at the opportunity to perform and create badass music with you guys.

"Chris Adler, thank you for introducing me to MEGADETH — and for your encouragement and support."

Said Adler: "It has been an honor and a pleasure to join my favorite band of all time, and to be a part of their return to the top. I had an amazing time with everyone involved, from the writing, arranging and recording, to the touring and friendships built along the way.

"There was no argument or drama, no hidden story. MEGADETH needs and deserves a full-time drummer, and as much as I'd like to be, I can't be in two places at once.

"For my part, I am very lucky to be a part of LAMB OF GOD, and to also have gotten a chance to dance with my heroes at the ball. I still can't believe it sometimes when I think of myself as a kid, opening up my MEGADETH albums...and now I'm an alumni! I'm very proud of that — and I will continue to be their biggest fan."

Adler, who called Verbeuren "probably [one of the] top three drummers in the world," recommended Dirk for the MEGADETH job this past spring after conflicting schedules prevented Chris from playing with the band at several U.S. festivals. Chris told Banger TV's "Lock Horns" how the connection came about. "We tried as much as we could with all the promoters and all the festivals to have us coincide and play on the same day. I've done double duty with LAMB and MEGADETH across the U.K. and done five shows with them along [another] tour, because we were able to collide and make those things happen. I love playing with those guys and I would love to be there, but obviously I cannot be in two places at once."

He continued: "Dave asked me… He said, 'As we're doing this, and if you're not able to be there… I understand you wanna fulfill your commitment with LAMB OF GOD. Help me find… Who would you want to drum for us?' He asked, 'If there was someone out there that you would personally recommend, personality-wise and playing-wise?'"

While Verbeuren was playing with MEGADETH, his seat in SOILWORK was occupied by Bastian Thusgaard of THE ARCANE ORDER. It is not clear if Thusgaard will now join SOILWORK on a more permanent basis.