U.K.'s Metal Hammer magazine has uploaded a new podcast featuring an audio interview with MEGADETH mainman Dave Mustaine. Dave talks about the recording of MEGADETH's new album; the upcoming Priest Feast tour; the state of the metal scene; and other topics.

You can download the podcast as an MP3 audio file at this location. (Note: The Mustaine interview begins around the 24-minute mark.)

On January 7, MEGADETH commenced the recording process for its twelfth studio album at the band's own Vic's Garage studio in San Marcos, California. The CD is once again being helmed by acclaimed British producer Andy "Undie" Sneap, who produced MEGADETH's last album, "United Abominations" (May 2007, Roadrunner Records).

Tentatively due later this year via Roadrunner Records, MEGADETH's forthcoming LP will be the group's first with guitarist Chris Broderick, who replaced Glen Drover at the end of 2007.

Mustaine recently told Revolver magazine that MEGADETH's upcoming CD will contain "stuff that's melodic like nobody's business, stuff that's heavier than hell, and stuff that's a combination of both." He said, "The way I write, I'll play a riff and tape it and save it. And if I don't use it now, I'll use it later. The very first song I ever wrote, 'Rust In Peace… Polaris', didn't appear on anything until the fourth MEGADETH record. Right now, there are about 20 songs that are in the making, and there's another good 25-to-30 hours worth of guitar riffs on tape. And I've also got a lot of old lyrics I've assembled over my career. Some of it's relevant to this day and age; some of it is stuff that, if I released it, would probably get me in a lot of trouble. Those songs deal with a lot of the anger that I felt when I was younger and reading things like [the 1971 underground manual for making homemade explosives] 'The Anarchist Cookbook'."

In a recent online posting, Mustaine stated about the band's new material, "I am more excited about this new record than I was with 'United Abominations' or anything in the last several years. . . I am not saying that this is 'Rust In Peace 2'! But I can say that the five out of nine songs I have arranged, I like and love them all, and every one of the songs has one or more of the strong points of me as a guitarist being showcased instead of me writing songs for radio — radio that won't play us anyway. . . This is really going to be a record that will make a lot of people that thought we couldn't do it anymore sit up and take notice." 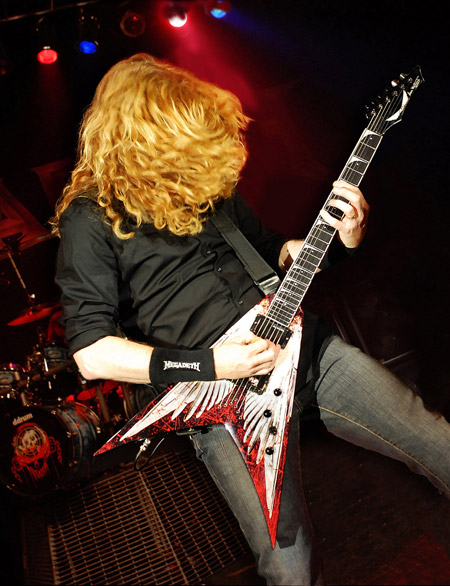